The People Have Spoken

This series documents the events that occurred in Zimbabwe in November 2017 that led to the resignation of President Robert Mugabe after 37 years in office.

On the 15th November, 2017 the Zimbabwe Defence Forces (ZDF) seized control of strategic locations in the capital city and placed the country’s 93-year-old president, Robert Mugabe, and his family under house arrest. The military intervention took place just over a week after the President had sacked Vice President Emmerson Mnangagwa and was widely viewed as the final stage in a succession battle between the ousted Mnangagwa and First Lady, Grace Mugabe, who had been politicking to take over from her husband.

Emboldened by the military presence, tens of thousands of Zimbabweans responded to a call by the leader of the Zimbabwe National Liberation War Veterans Association (ZNLWVA), Christopher Mutsvangwa, and took to the streets in support of the ZDF and to call for the resignation of the President.

The solidarity march marked the first time in nearly four decades that Zimbabweans were able to protest against Mugabe publically without fear of reprisal. Within a week, Mugabe had resigned and Emmerson Mnangagwa was inaugurated as President.

At the inauguration, many of the spectators had only ever known one President and it was an emotional occasion as people flocked from all over the country to be present for the historic changeover.

Several days earlier, as Mnangagwa returned from exile after the military takeover that had ousted Mugabe, he proclaimed, “The people have spoken. The voice of the people is the voice of God.” His words were emblazoned on signs across the stadium and the promises he made in his inauguration speech gave people a reason to hope that the political and economic situation in the country might change for the better. Yet amongst the crowd, the heavy military presence could not be ignored serving as a reminder of Mnangagwa’s unorthodox ascension to power. 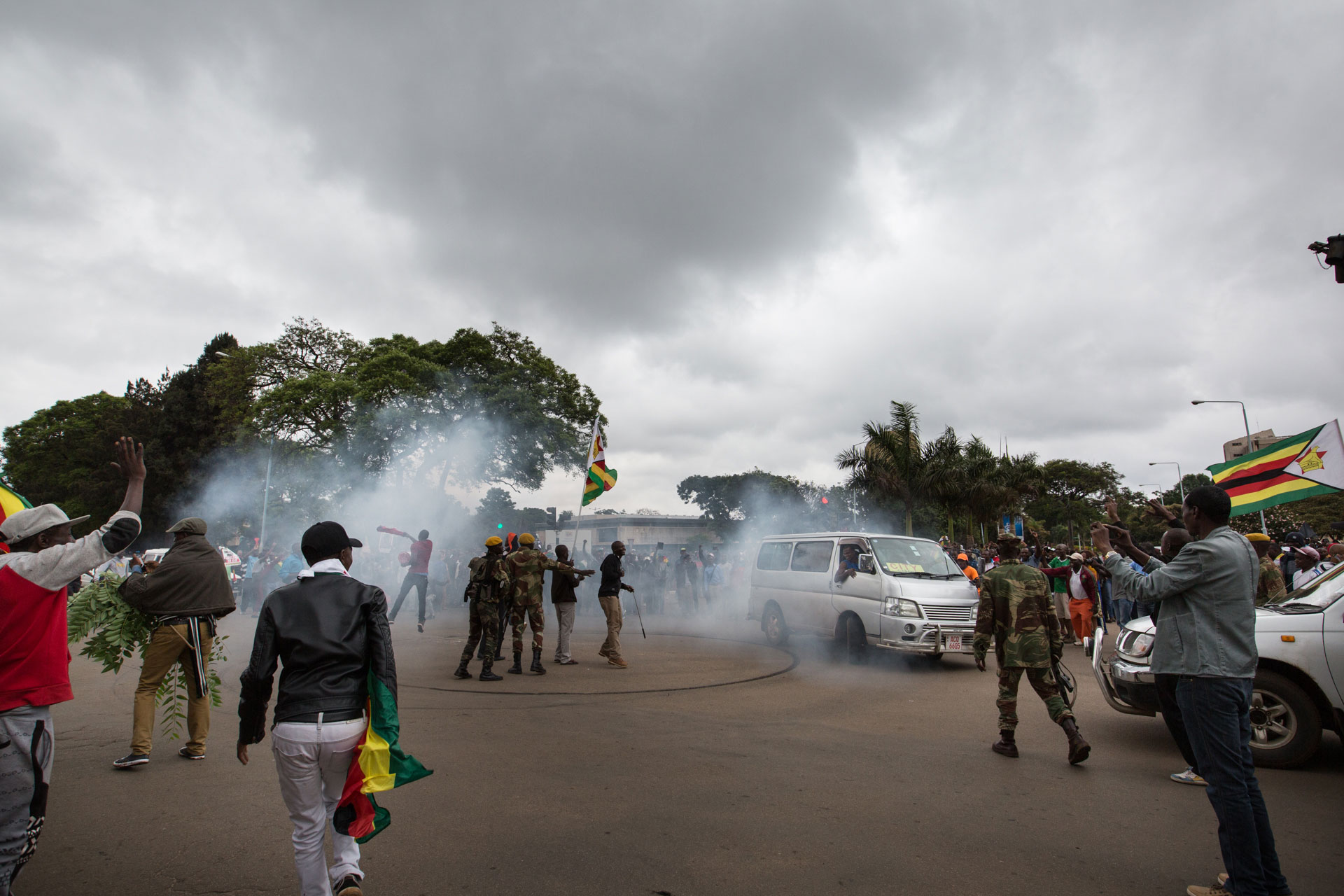 A combi taxi performs a burn-out around soldiers trying to direct traffic at the intersection in front of ZANU PF headquarters in downtown Harare. 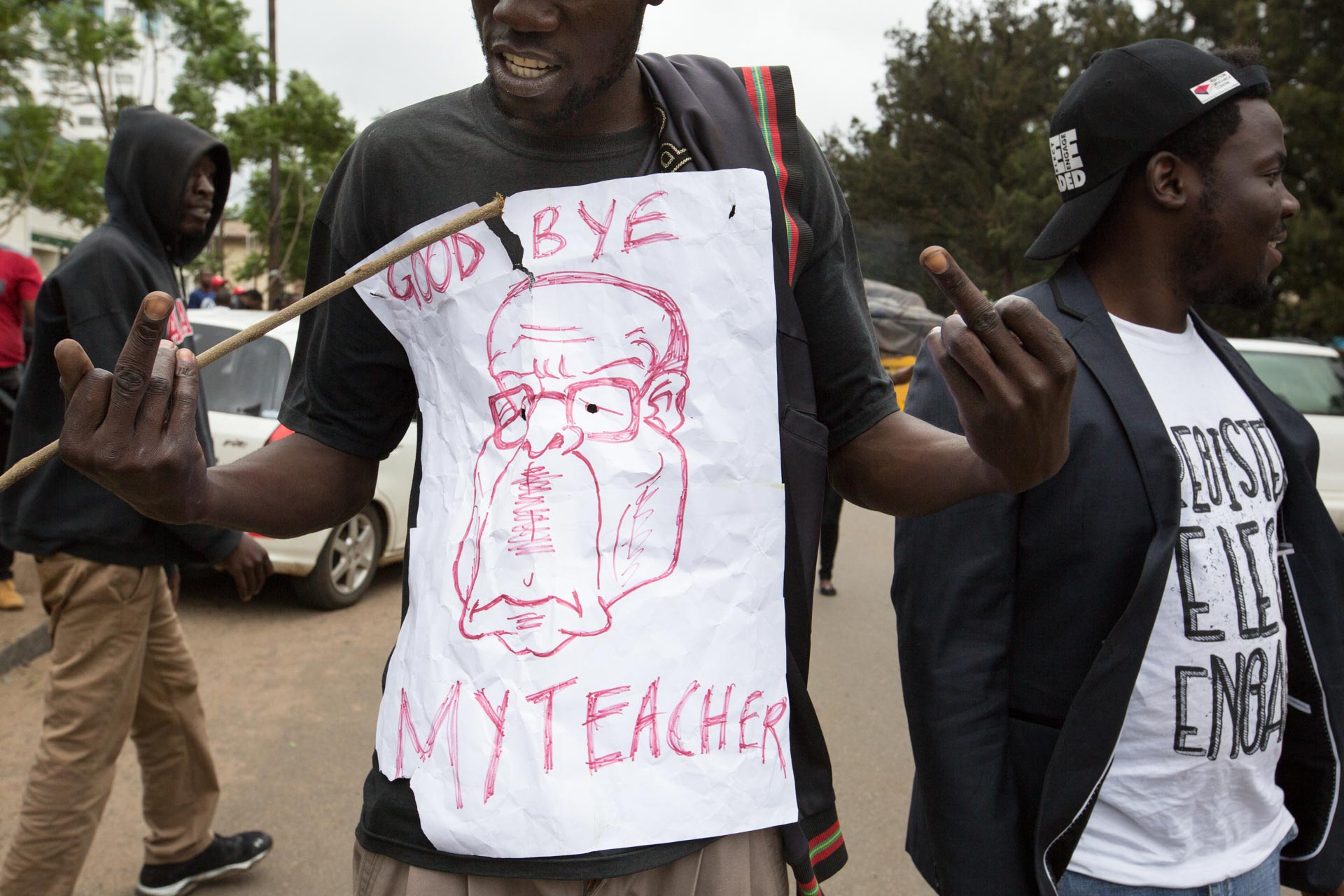 A man expresses his feelings about President Robert Mugabe publicly in a manner that could previously have landed him in prison. Just a week before, a young American woman had been arrested for a defamatory tweet about the President. 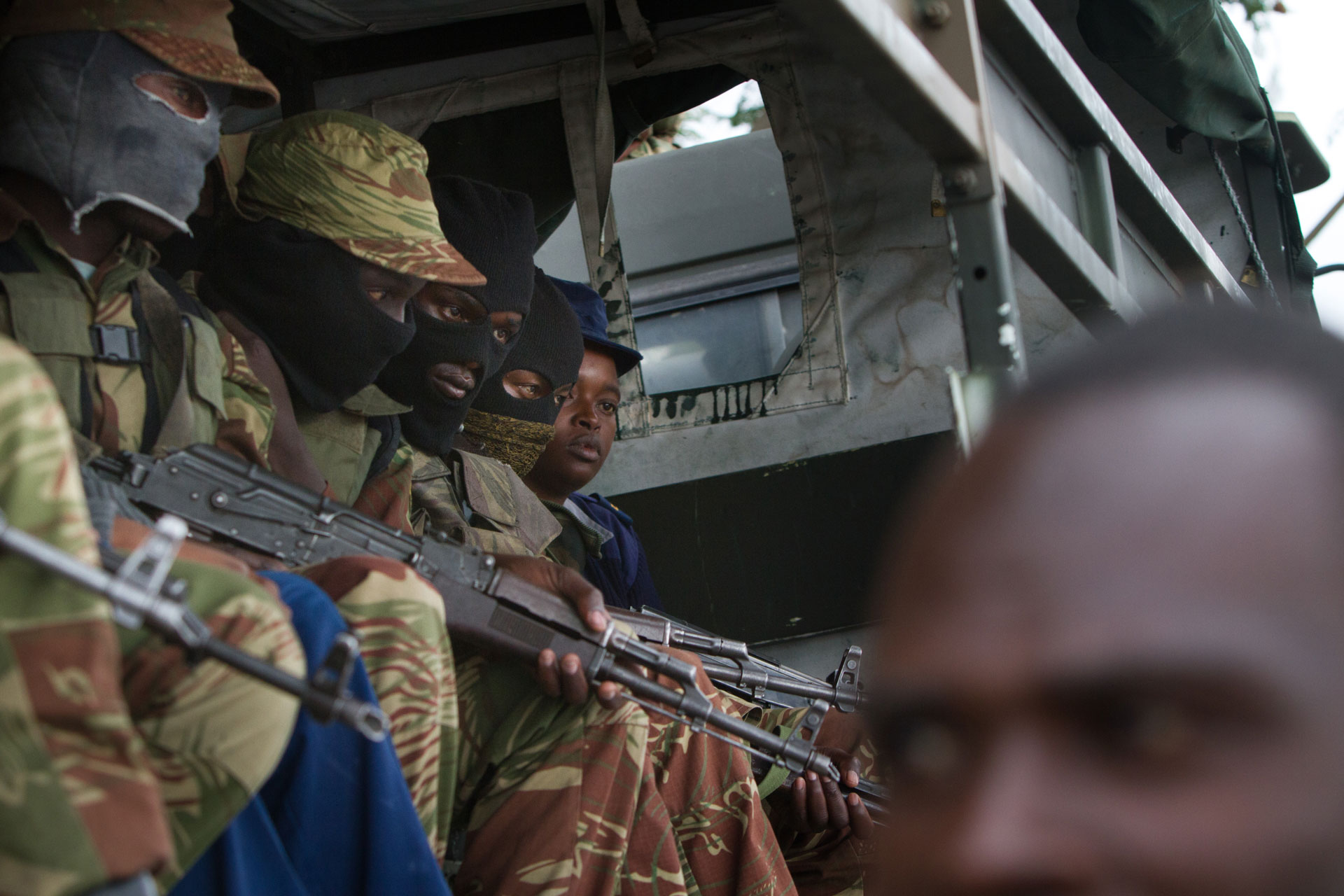 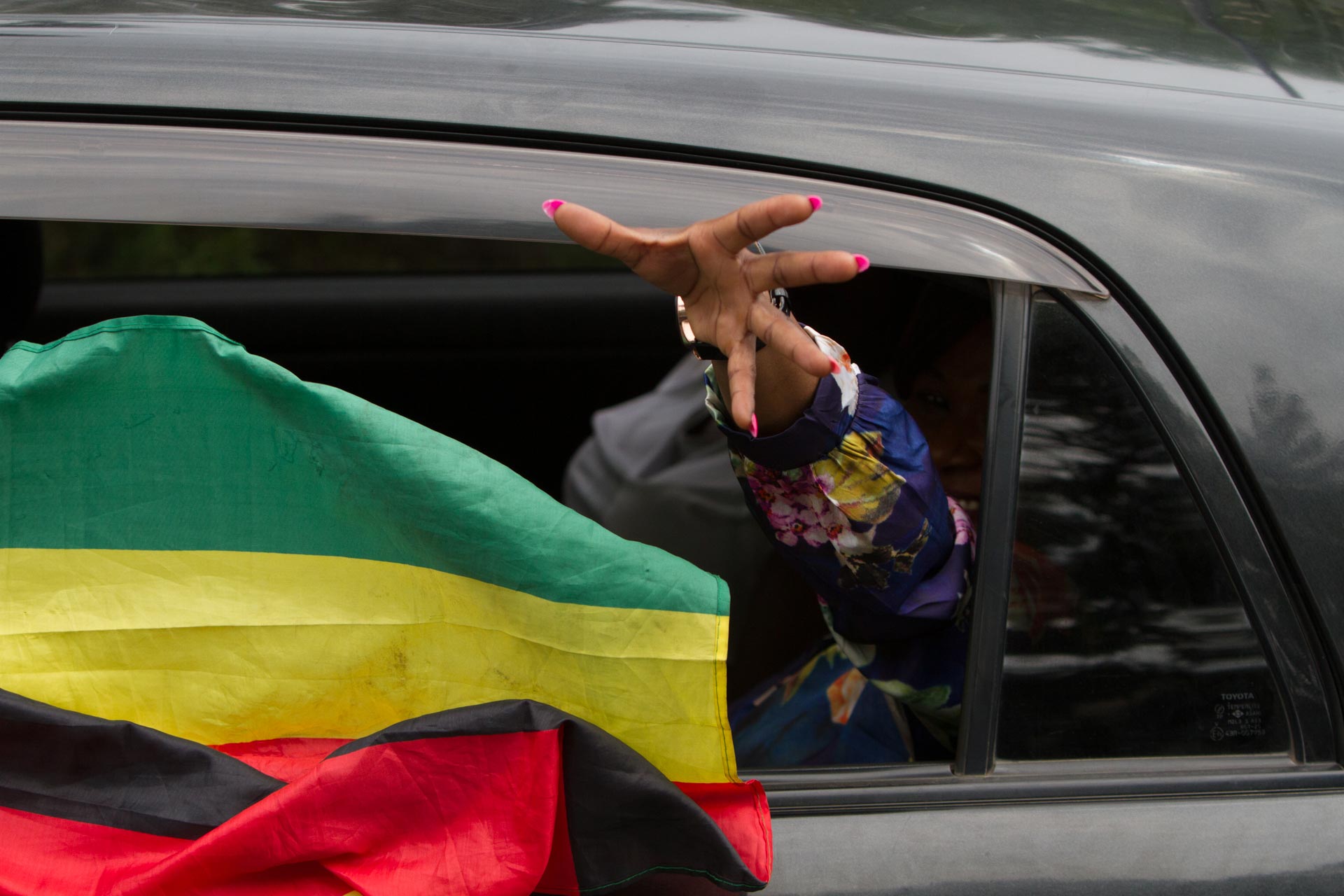 A woman waves from a car streaming a Zimbabwean flag. Cars, busses, and trucks overflowed with people as they navigated their way across the city. 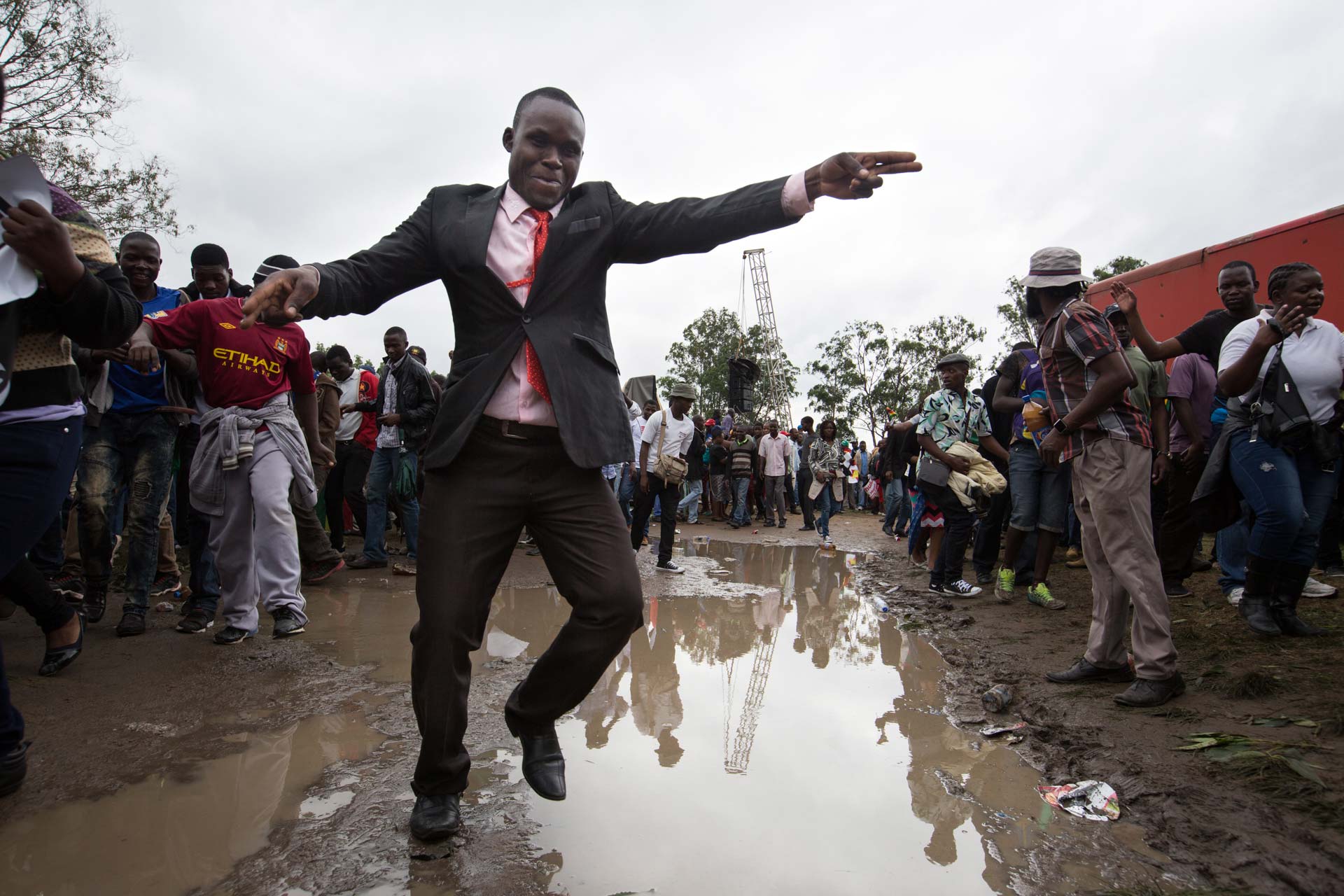 A man gestures as people leave Zimbabwe Grounds in Highfields, Harare after being directed to march to State House 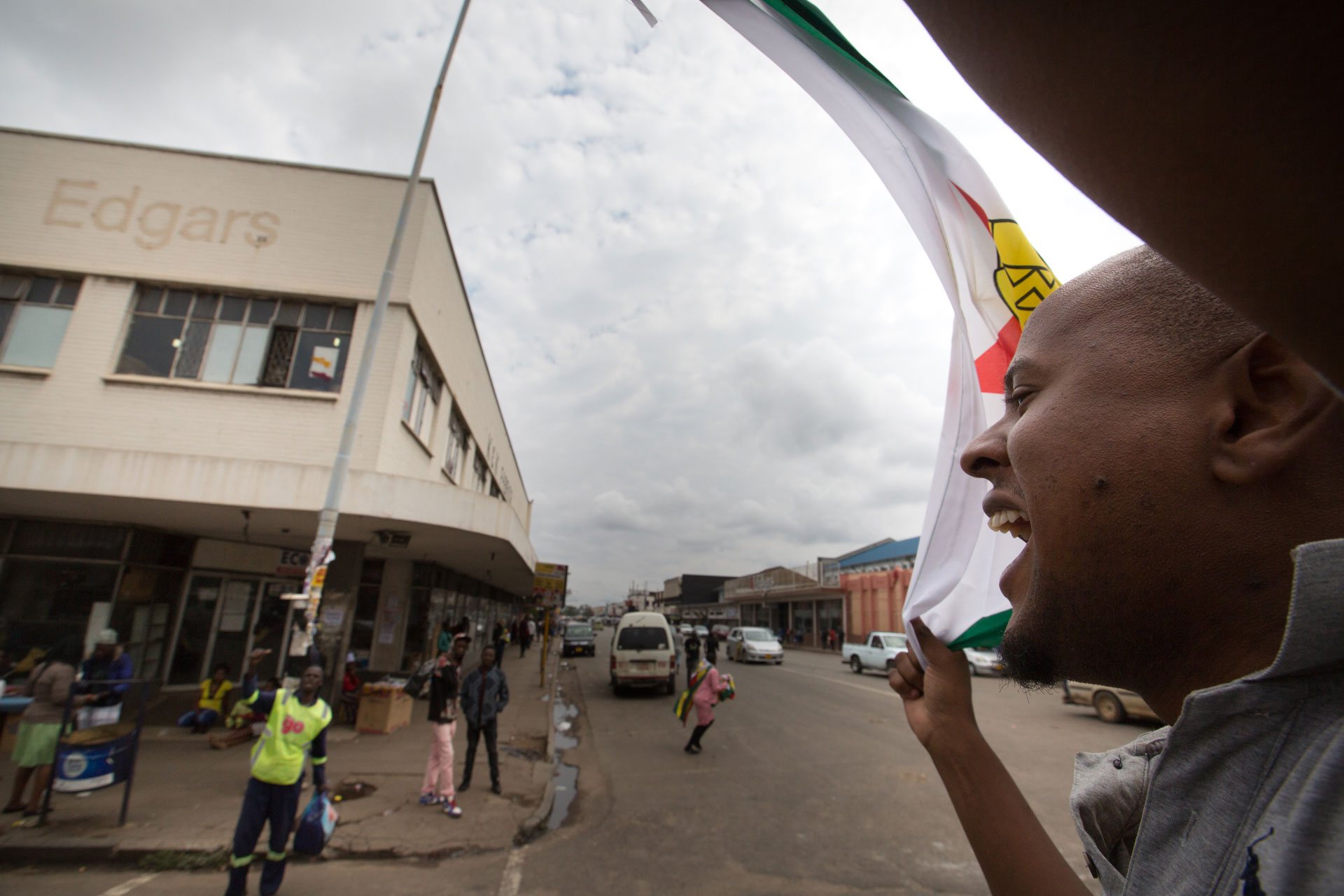 Energy Chiduwa shouts for people on the street to join the march to State House as he rides on the roof of a car headed down Bank Street in Harare's CBD. 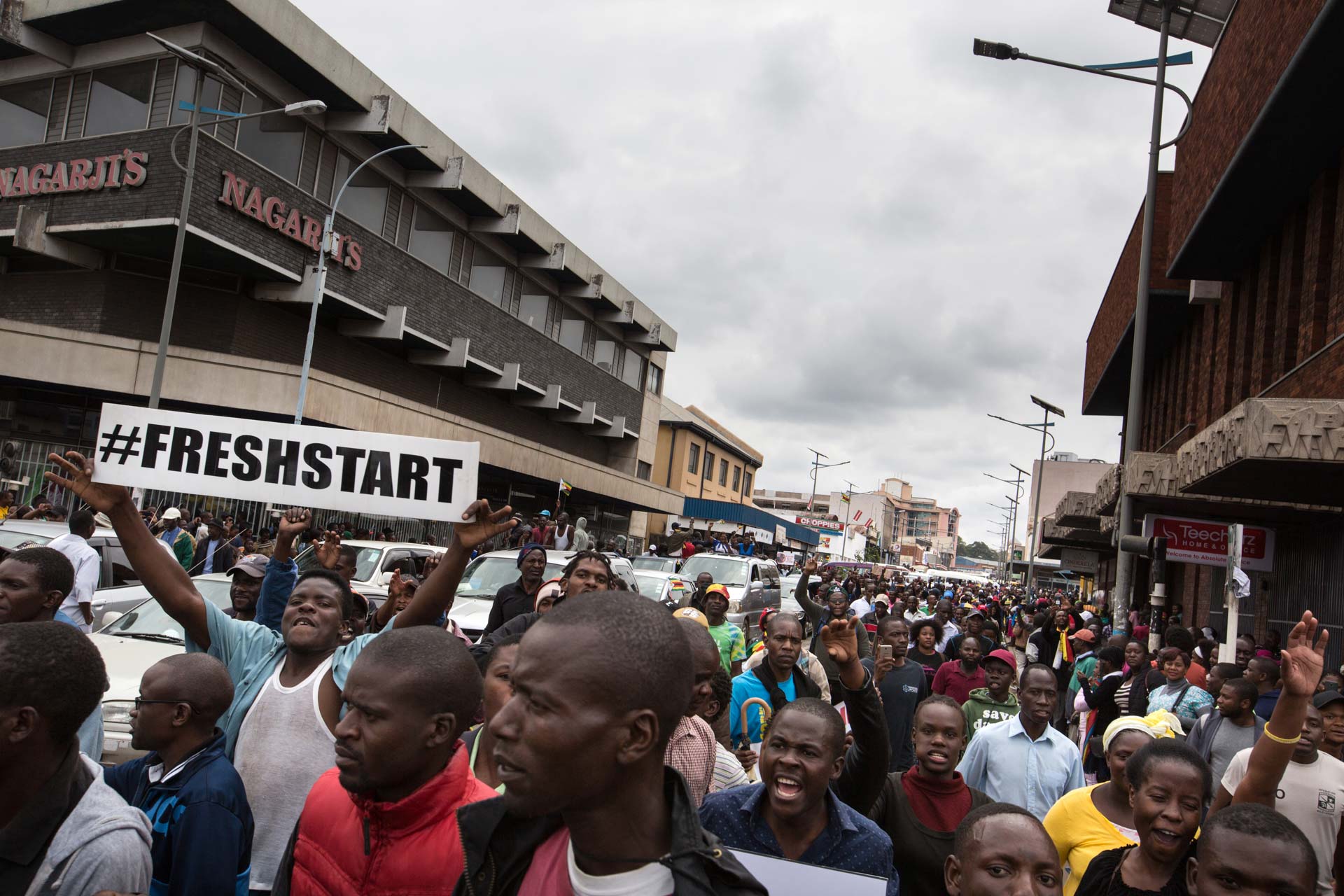 Thousands of people flow down Leopold Takawira Street towards the city centre. In a country that was limited to expressing itself through social media, hashtags were quickly adopted as a call to action. 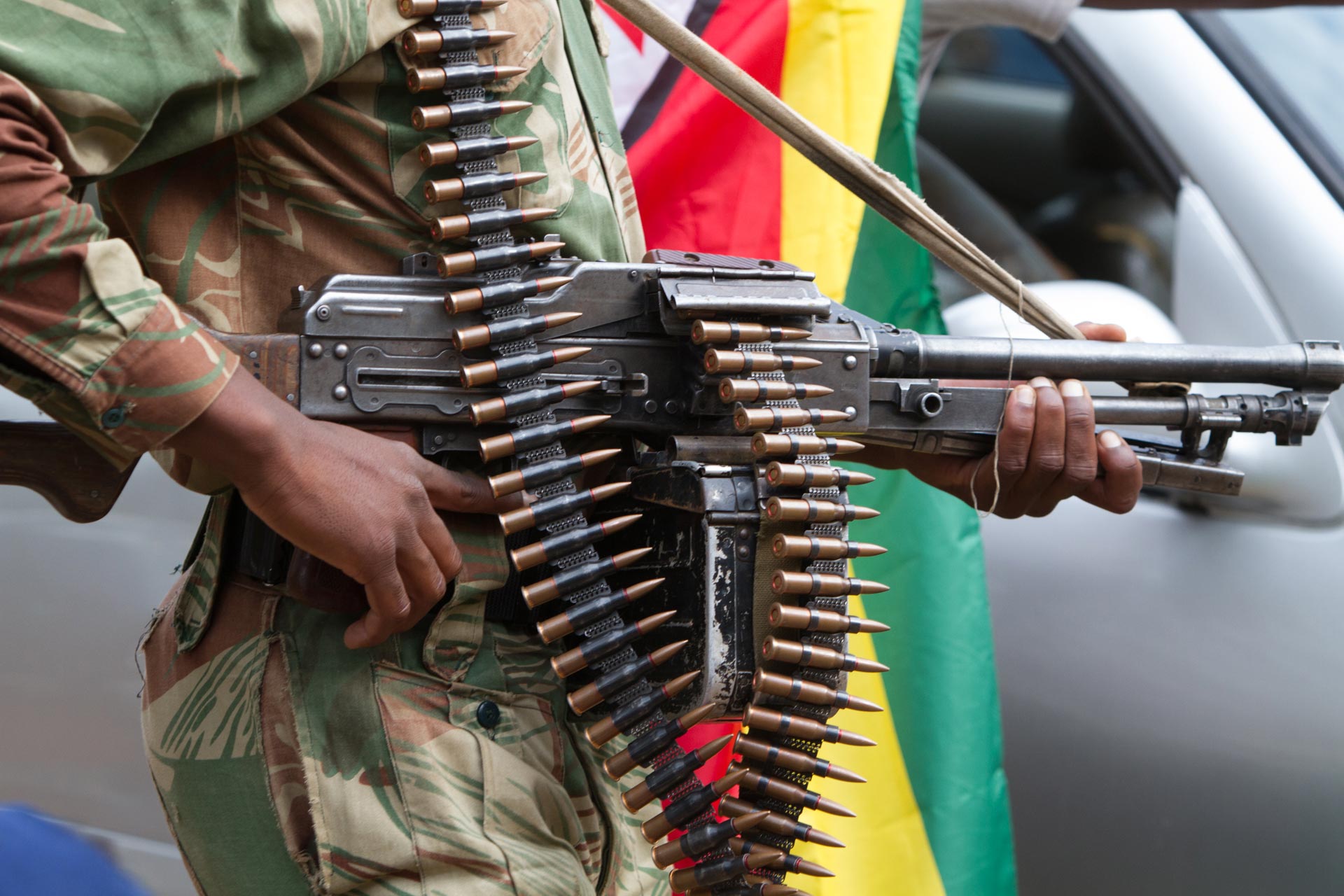 An armed soldier keeps an eye on the crowd. Despite the heavy weaponry and excited atmosphere there was not one incidence of violence recorded during the march. 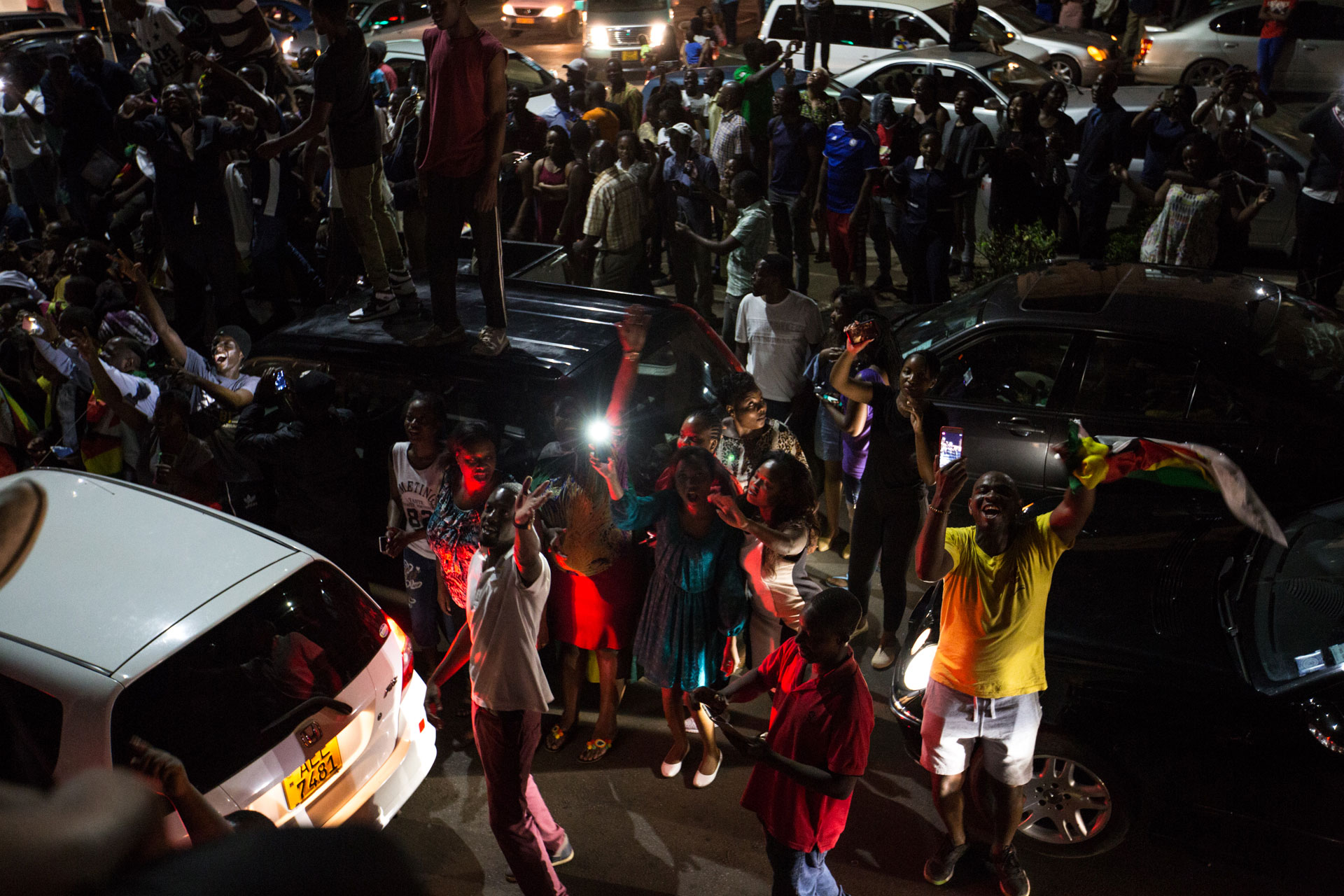 Samora Machel Avenue in Harare's CBD is packed with people as news of Mugabe's resignation spreads through the city on the evening of November 21. 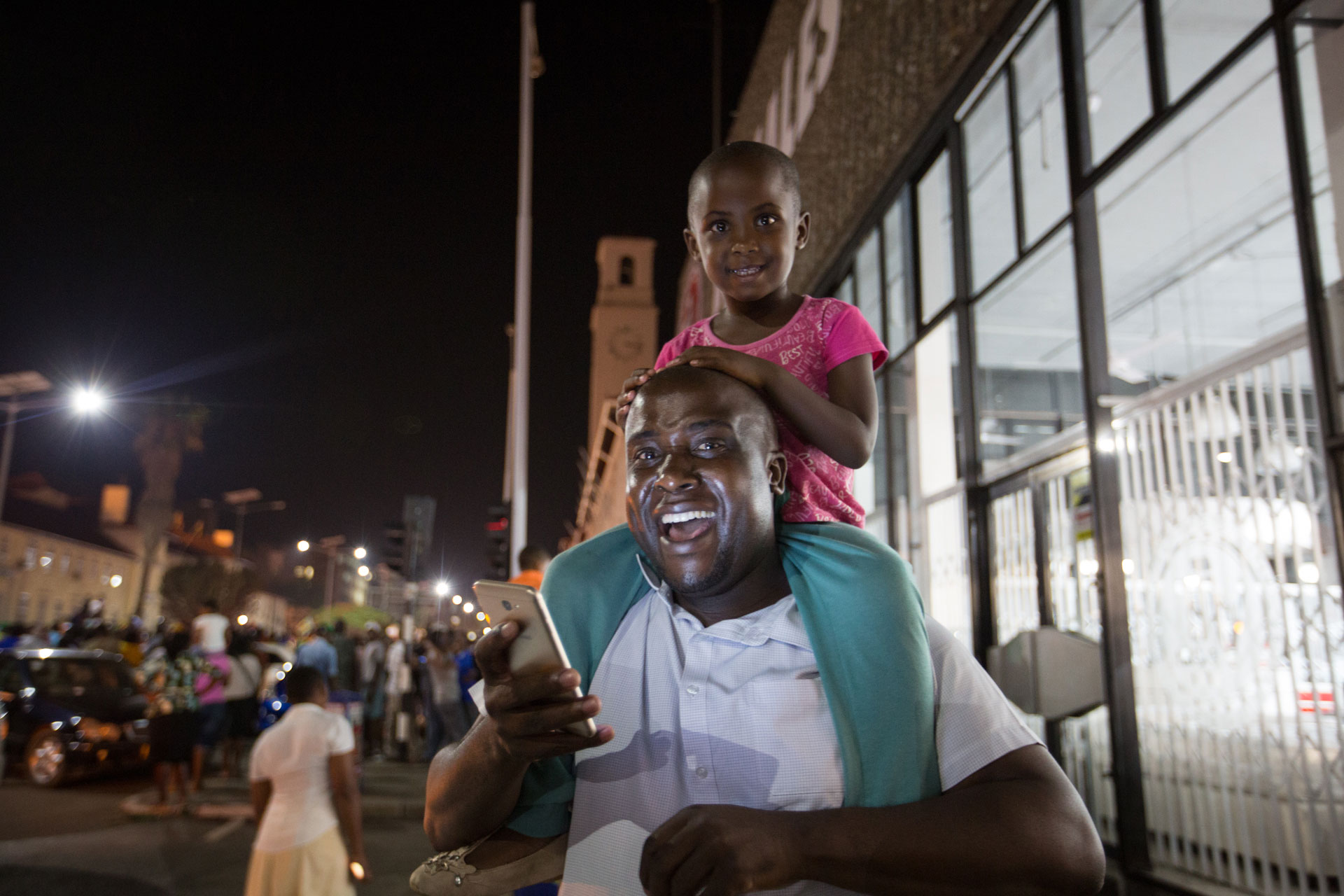 A man and his young daughter join the celebrations on Samora Machel Avenue. He said it was important to him that his daughter experienced the day Mugabe resigned. 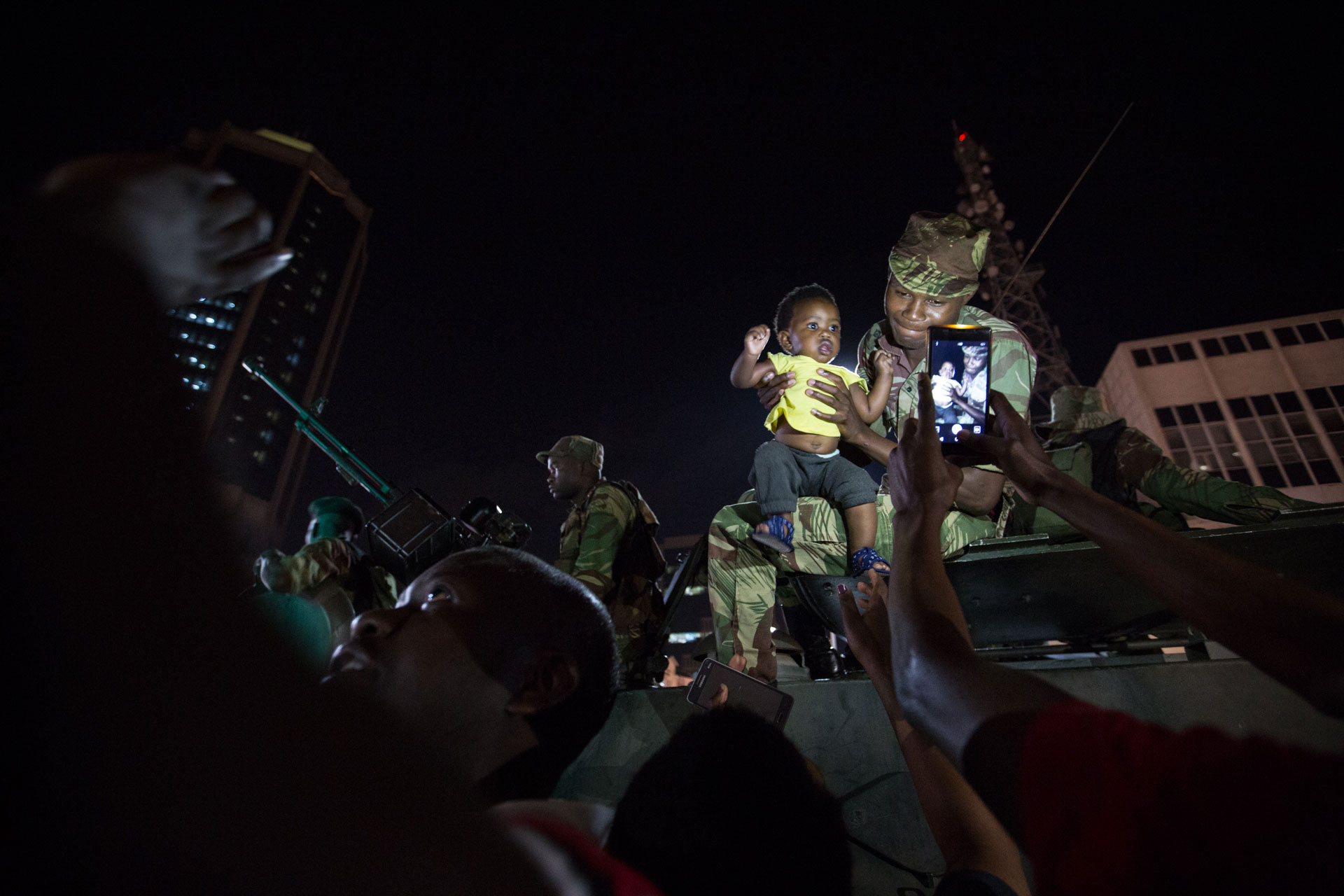 A soldier poses for a photograph with a baby during celebrations in front of the government offices on Samora Machel Avenue after Mugabe's resignation. People saw the soldiers as liberators. 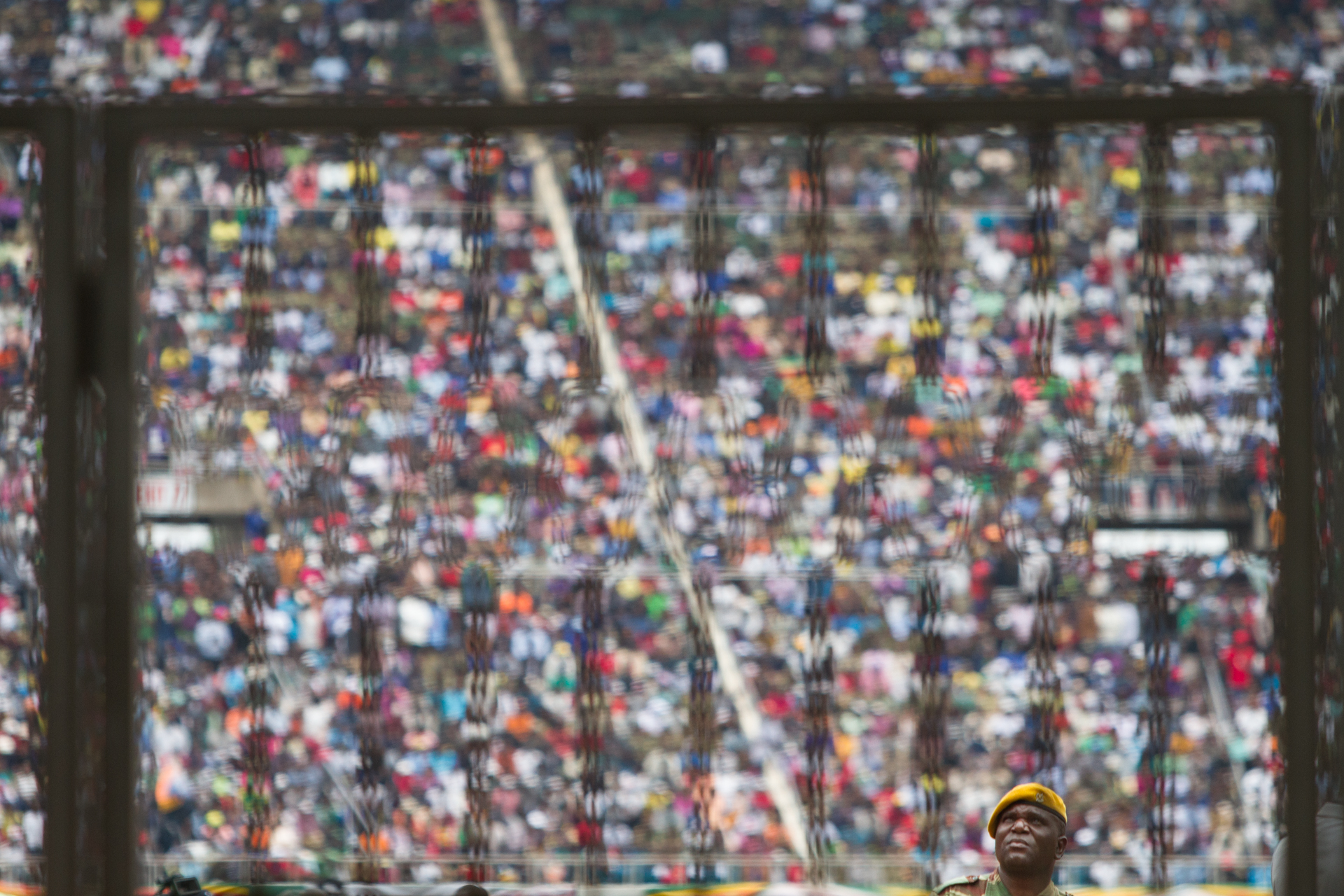 A soldier keeps an eye on the crowd during the inauguration ceremony for Emmerson Mnangagwa. Thousands came from all over the country to witness the end to the military takeover that oversaw the resignation of former President Robert Mugabe. 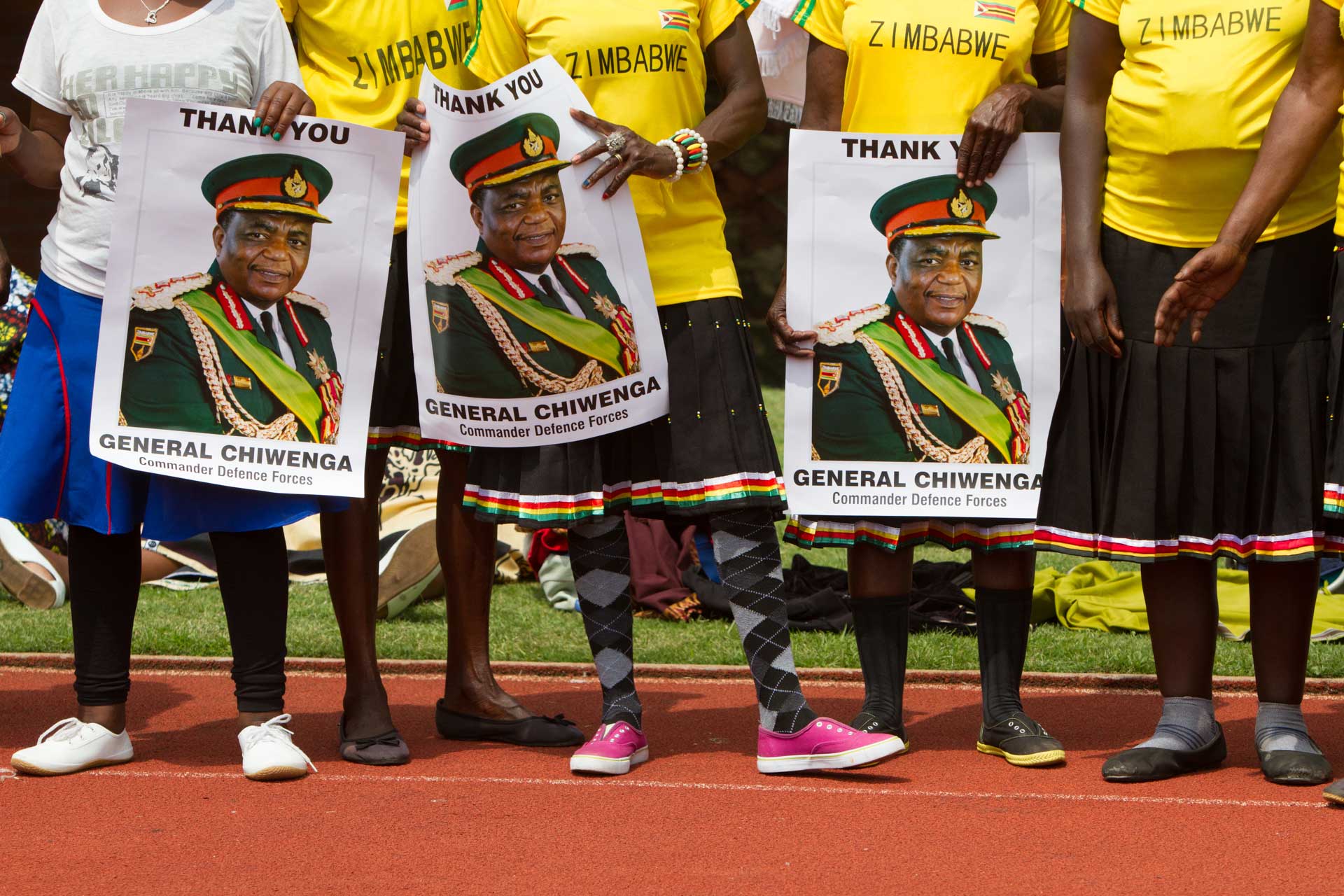 Supporters hold up pictures of General Constantino Chiwega, the leader of Zimbabwe's defence forces and man behind the 'coup' that led to the resignation of former President Mugabe. 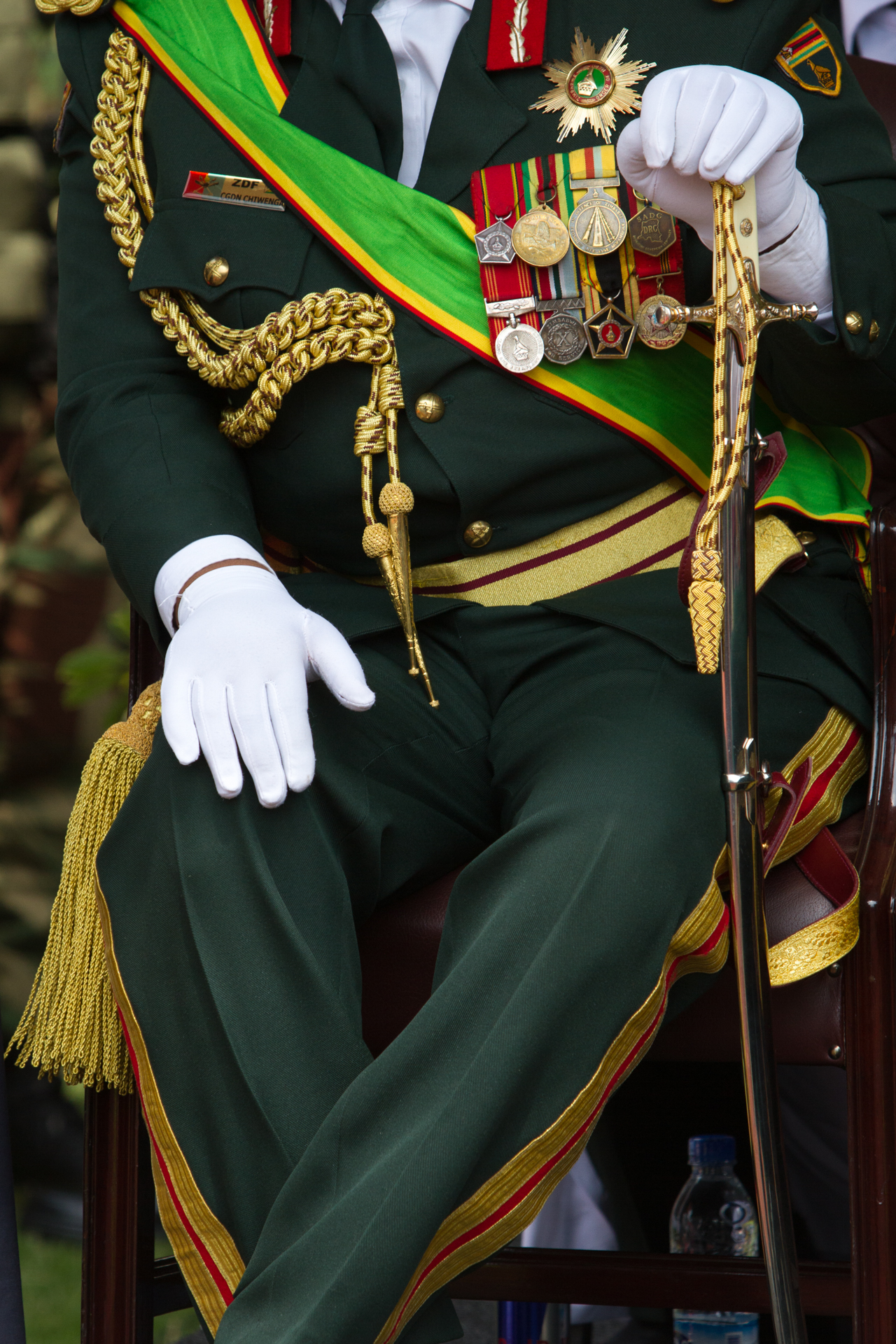 General Constantino Chiwenga waits for the proceedings to begin. 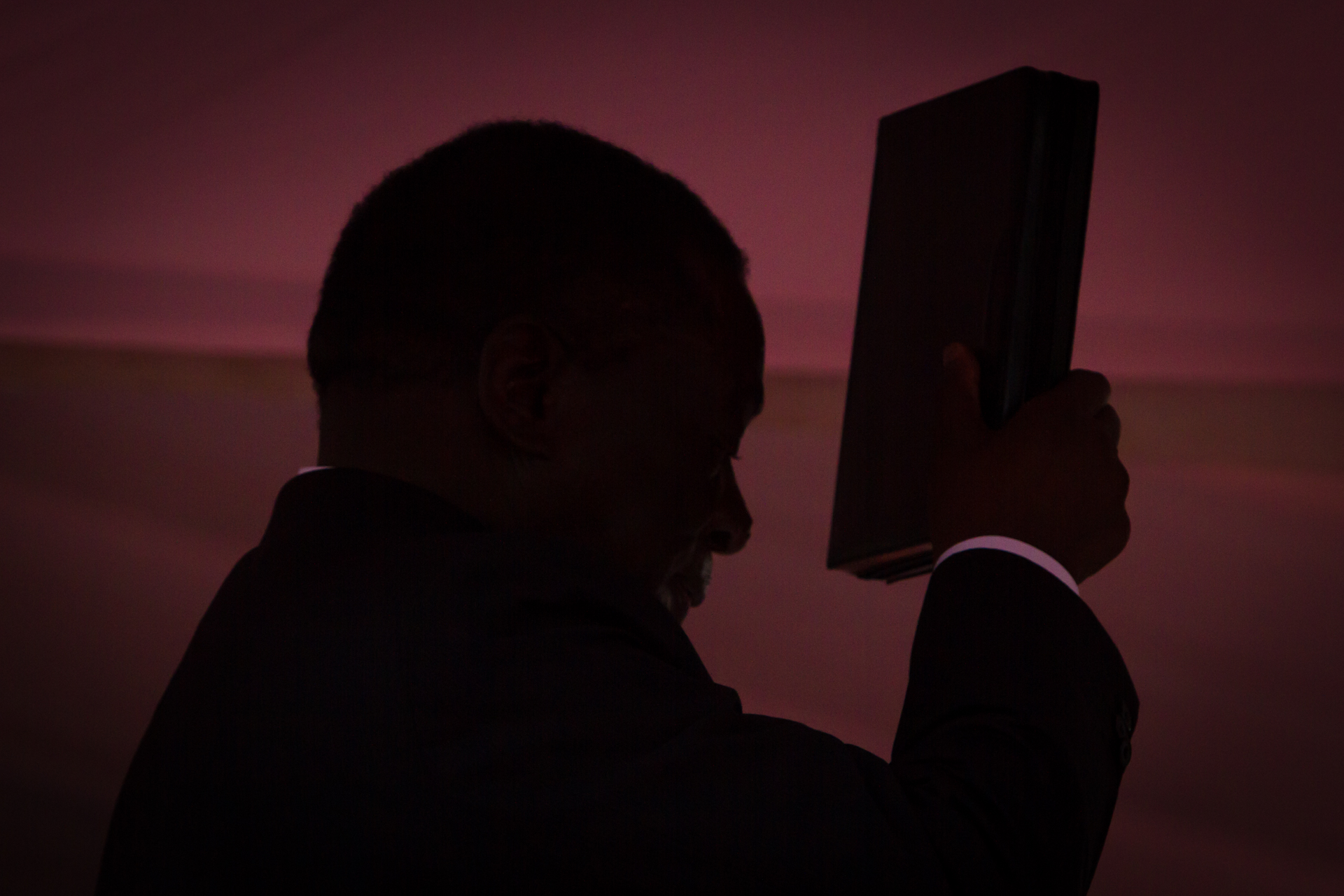 Emmerson Mnangagwa raises the bible to take the oath of office as new President of Zimbabwe. 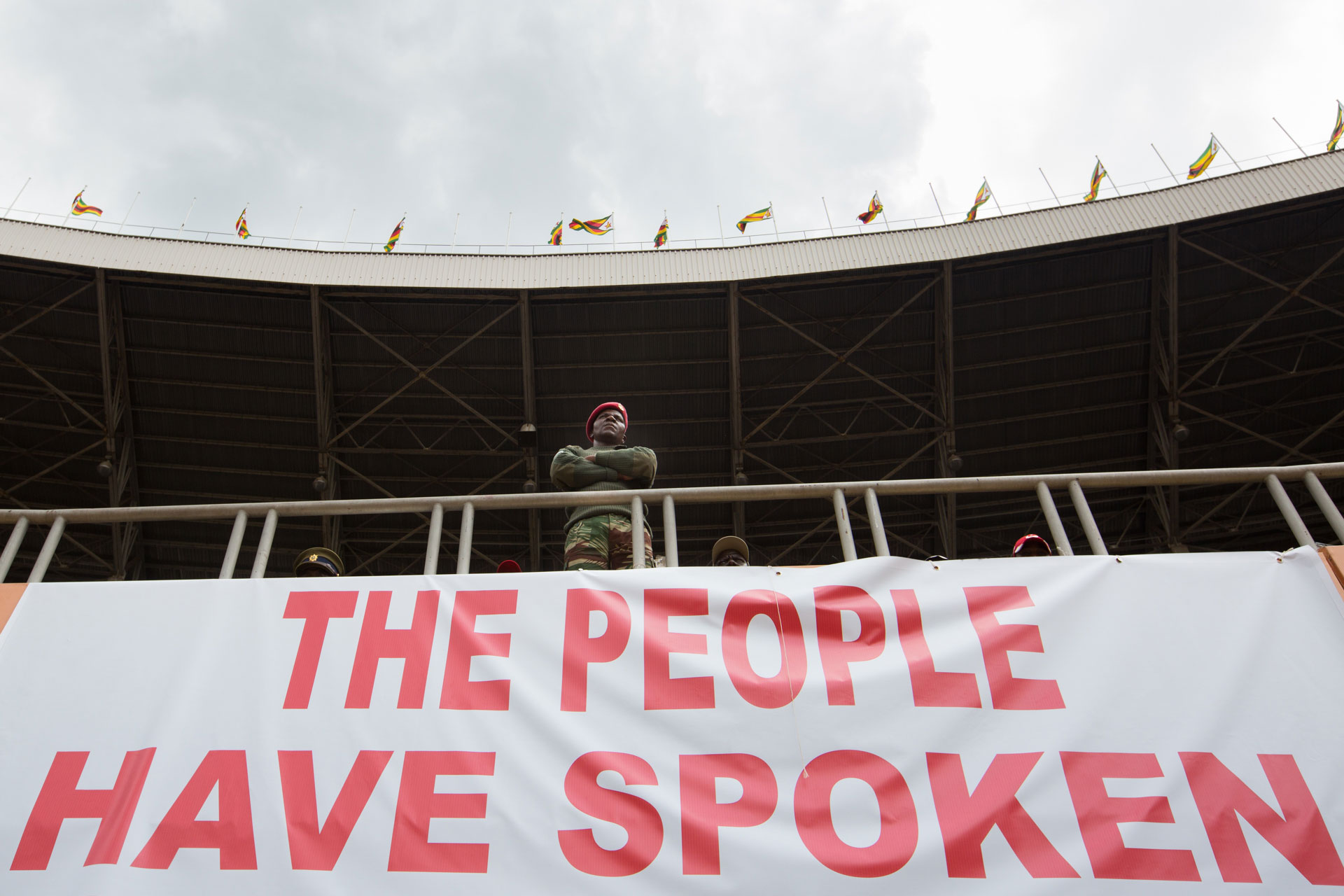 “The people have spoken. The voice of the people is the voice of God,” Mnangagwa told thousands of supporters gathered outside the ruling ZANU-PF party’s offices in Harare when he returned to Zimbabwe following the military takeover.