Towards the end of this assignment, I was told the original name of the Zambezi – ‘Kasambabezi’ – from a Tonga phrase meaning “only those who know the river can bath in it.” The phrase references Tonga knowledge of the deep water and shows the incredibly close relationship society had with ‘their’ river.

Meandering through eight countries, the Zambezi is Africa’s fourth largest river; indirectly affecting over 128 million lives as a source of water and food. Further adding to the river’s importance is Lake Kariba, the world’s largest man-made reservoir. Sharing a border between Zimbabwe and Zambia, Kariba provides hydroelectric power and supports a fishing and tourism industry. It all sounds positive, yet the Red Cross asserts that “the basin is also home to some of the most acute vulnerability in southern Africa,” and the region has been identified as particularly affected by climate change and its negative consequences.

The Tonga people were displaced from their ancestral home on the Zambezi River to make way for the building of Lake Kariba in 1956 and resettled further inland. “It was so difficult,” says Siamuchimba Muleya, “our hearts still feel that pain of leaving our crops behind. We had never experienced drought before, we only experienced it here, when we left our water.” Politically, the Tonga are a minority and their claims to the river have fallen on deaf ears.

Sixty years after forced relocation, this photo story examines where the Tonga are today and whether their water is still a resource for their belief system and way of life.

This story was completed through a Southern African Water Wire Fellowship from InterPress Service Africa. 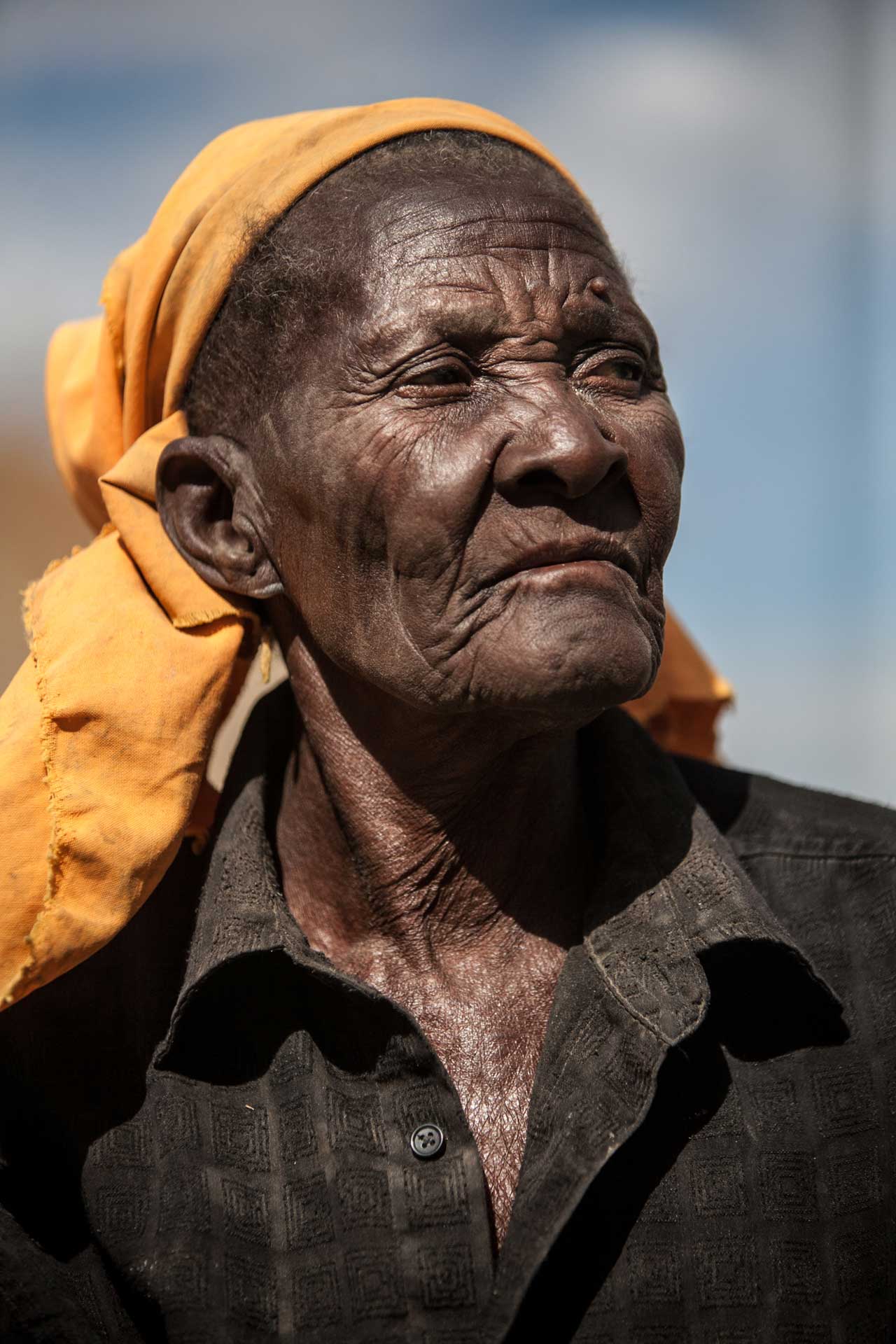 Emily Muleya, thought to be in her 80s, is one of the last survivors of her generation of Tonga who were forcefully relocated from their homes on the banks of the Zambezi River to make way for the building of Lake Kariba in the 1950s. Emily is a widow who has outlived nine of her ten children. She remembers clearing land for fields and homesteads when they moved and said the wild animals in the area caused "problems of life and death". 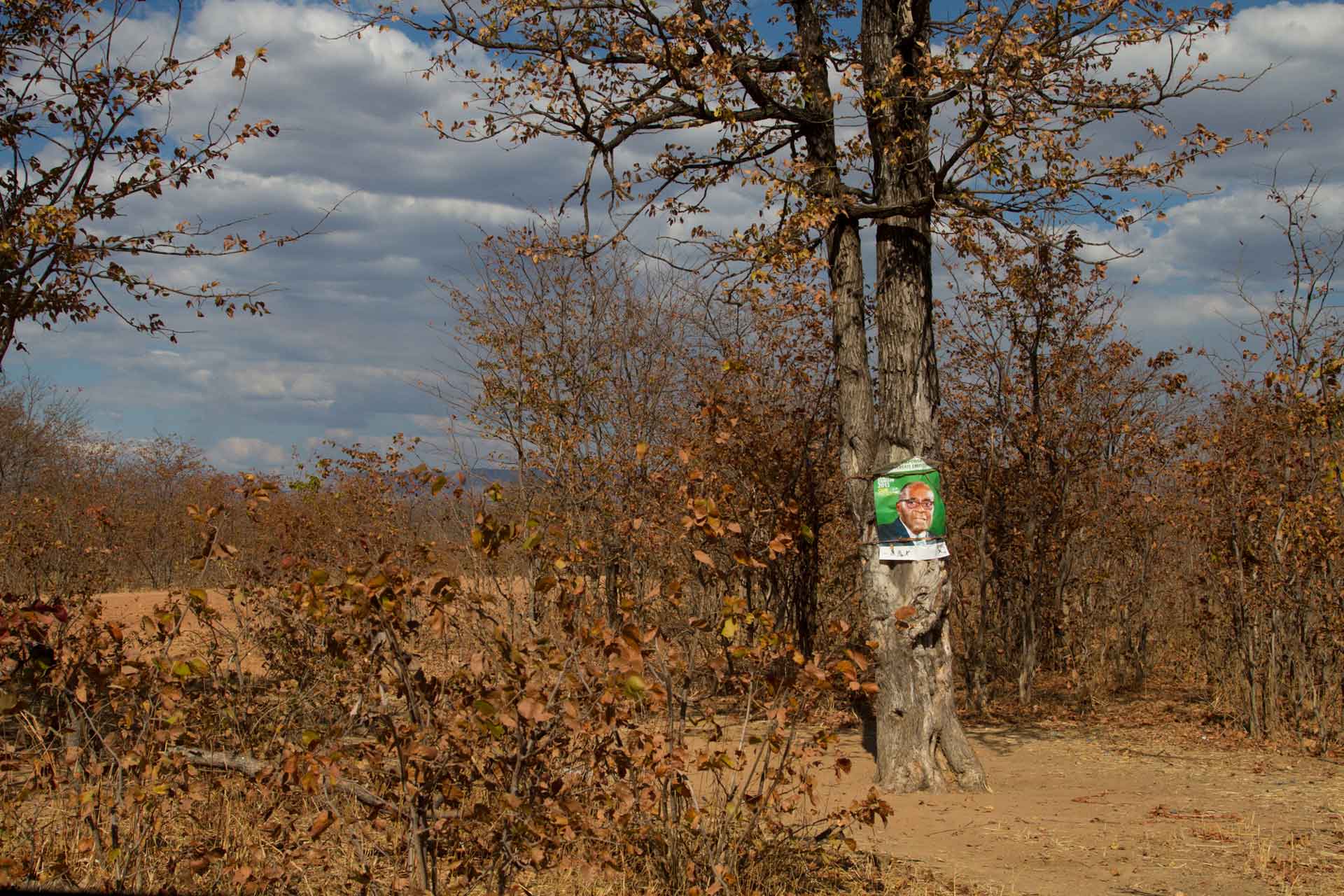 A ZANU PF election poster stuck on a tree near the Siabuwa roadside. With the lowest level of development and infrastructure in the country, and populated with 'minorities' - the Tonga and Ndebele - Binga North has voted for the opposition since its inception in 2000. 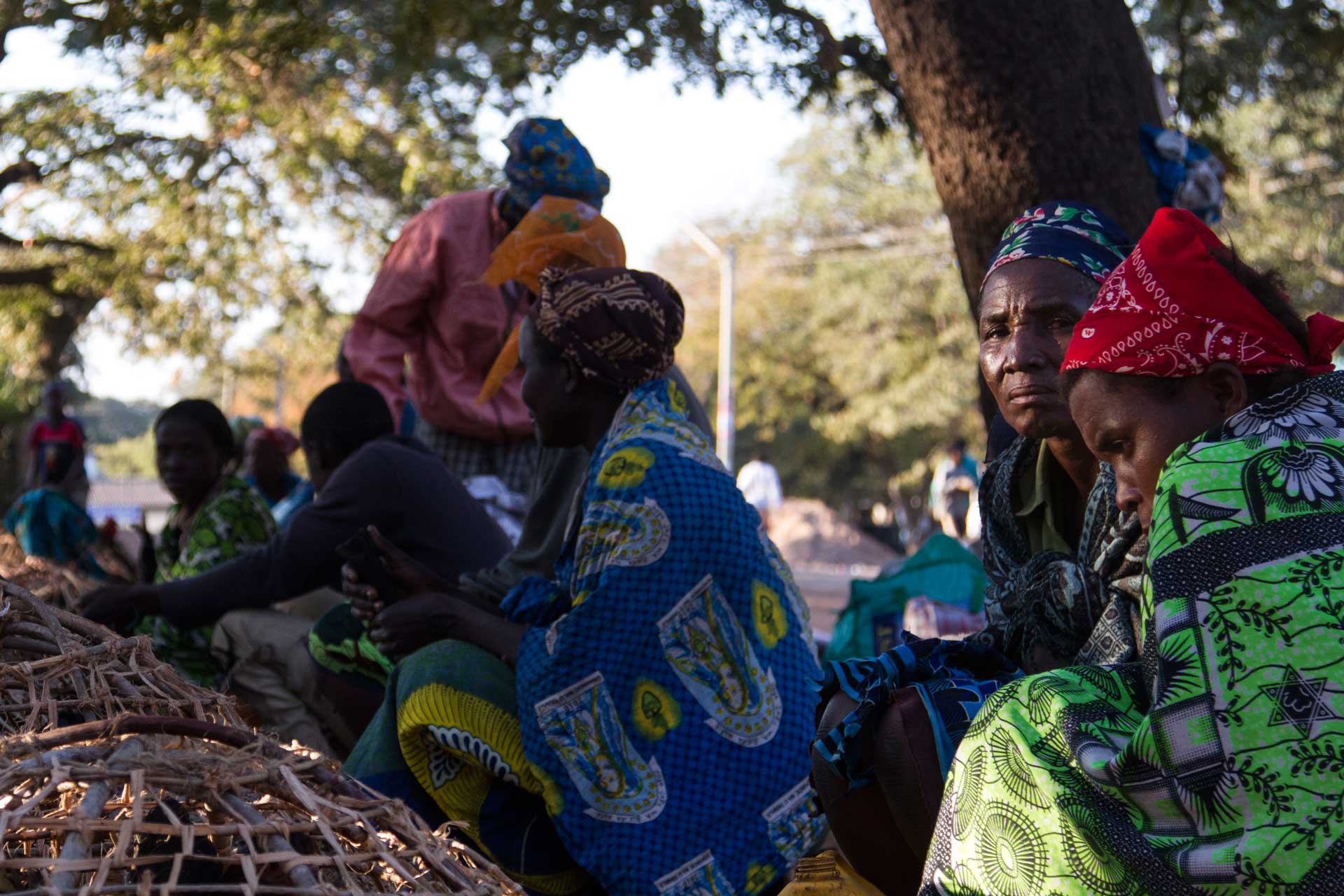 Tonga women from all over Binga district sell chickens in homemade cages in Victoria Falls' Chinotimba township in an effort to earn some money to take back to their cash-strapped villages. Many of the women are widows, and the majority of them provide the sole income in their families. On average, each woman earns about US$30 per two-week trip, after subtracting the costs of transport, accommodation and rental for the market space. 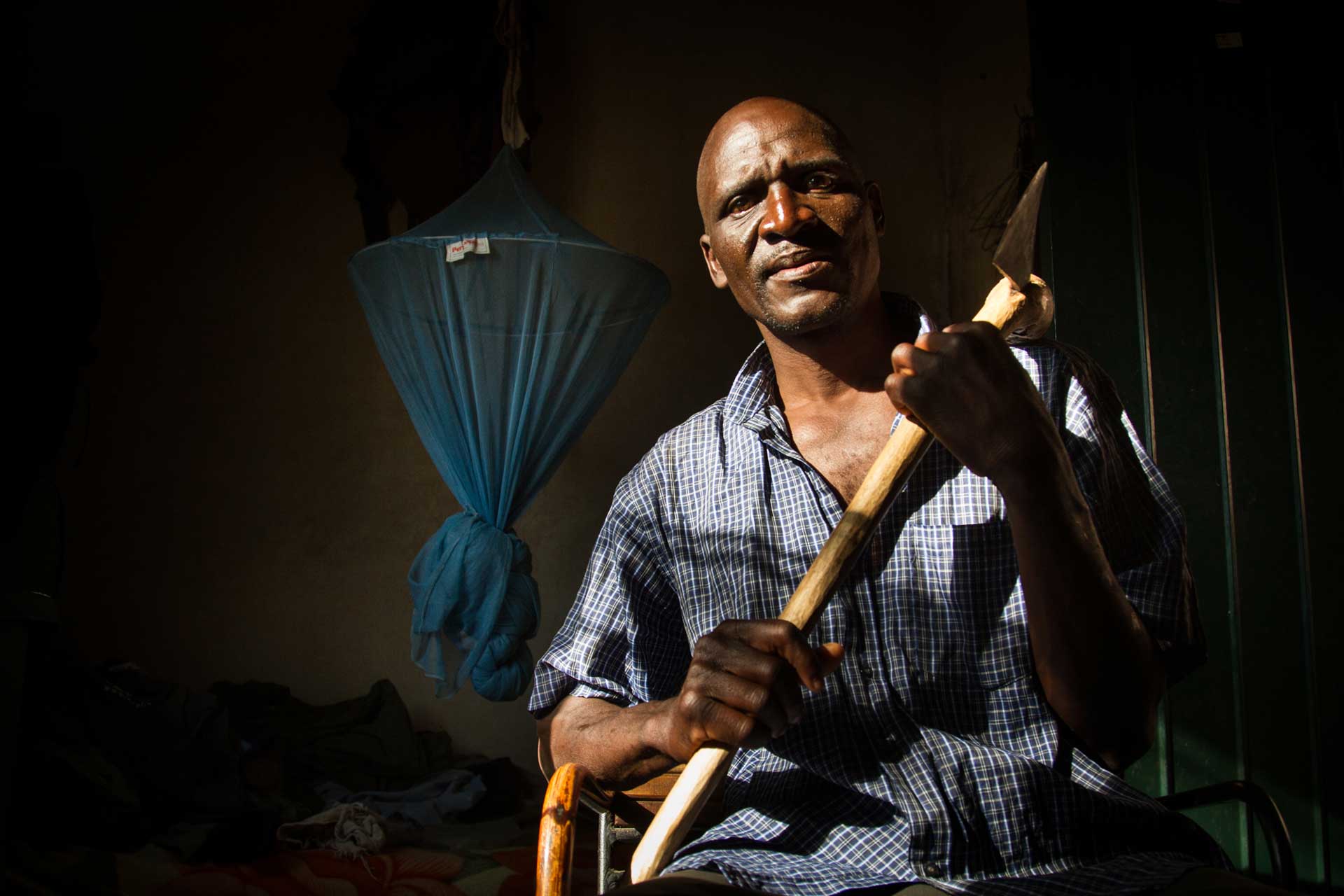 Ranger Tyson Mupande holds his axe to illustrate his Tonga heritage. Tyson was fortunate to be trained in anti-poaching at Kavira Forest on the Zambezi River and was then transferred to this game reserve in Victoria Falls in 1998. Tyson supports 11 people on his monthly salary of $230, but is one of the lucky ones in his community to have found a job. 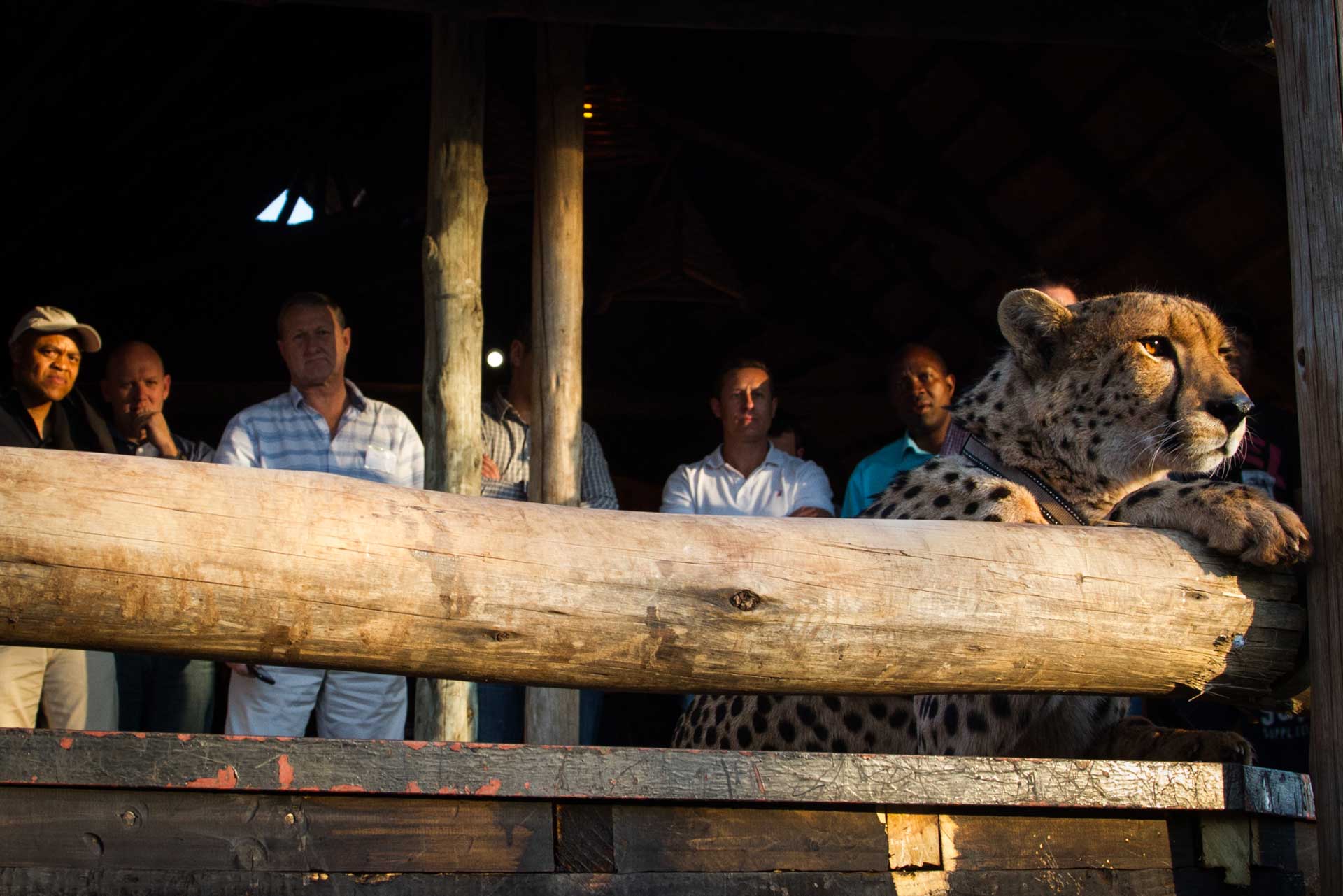 Sylvester the cheetah entertains tourists in Victoria Falls at Wild Horizons. Though wildlife bolsters the resort town's tourism industry, further downstream the story is much different. Zimbabwe's economic collapse left the more remote tourist spots on the Zambezi high and dry and the local communities struggling to support their families with very few jobs available. 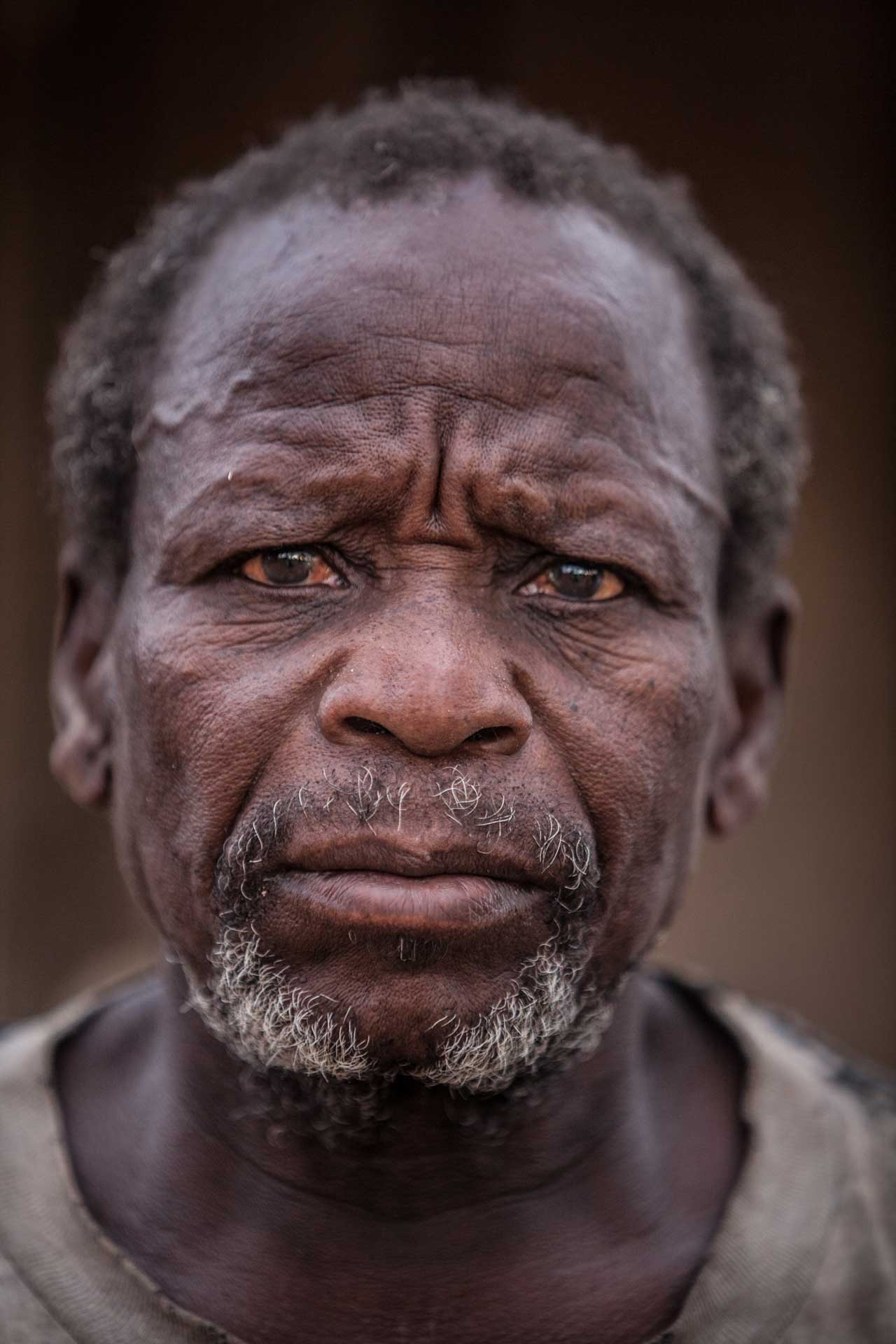 Joe Mwiinde (69) was 13 when his family was relocated about 60 km from their home in Nsengwe on the Zambezi river. As a young herdboy, he walked to his new home at Mucheni village driving the goats all the way. In spite of a total lack of education, Mwiinde managed to get a job with National Parks and worked at the nearby Chizarira National Park for 29 years before his retirement in 2004. In keeping with Tonga tradition, Mwiinde practices polygamy and has three wives, ten daughters and nine sons. Since his retirement no one in his family has had a job and Mwiinde does not receive a pension from the Department of National Parks because of paperwork and administrative difficulties that took place when the country adopted the US dollar. 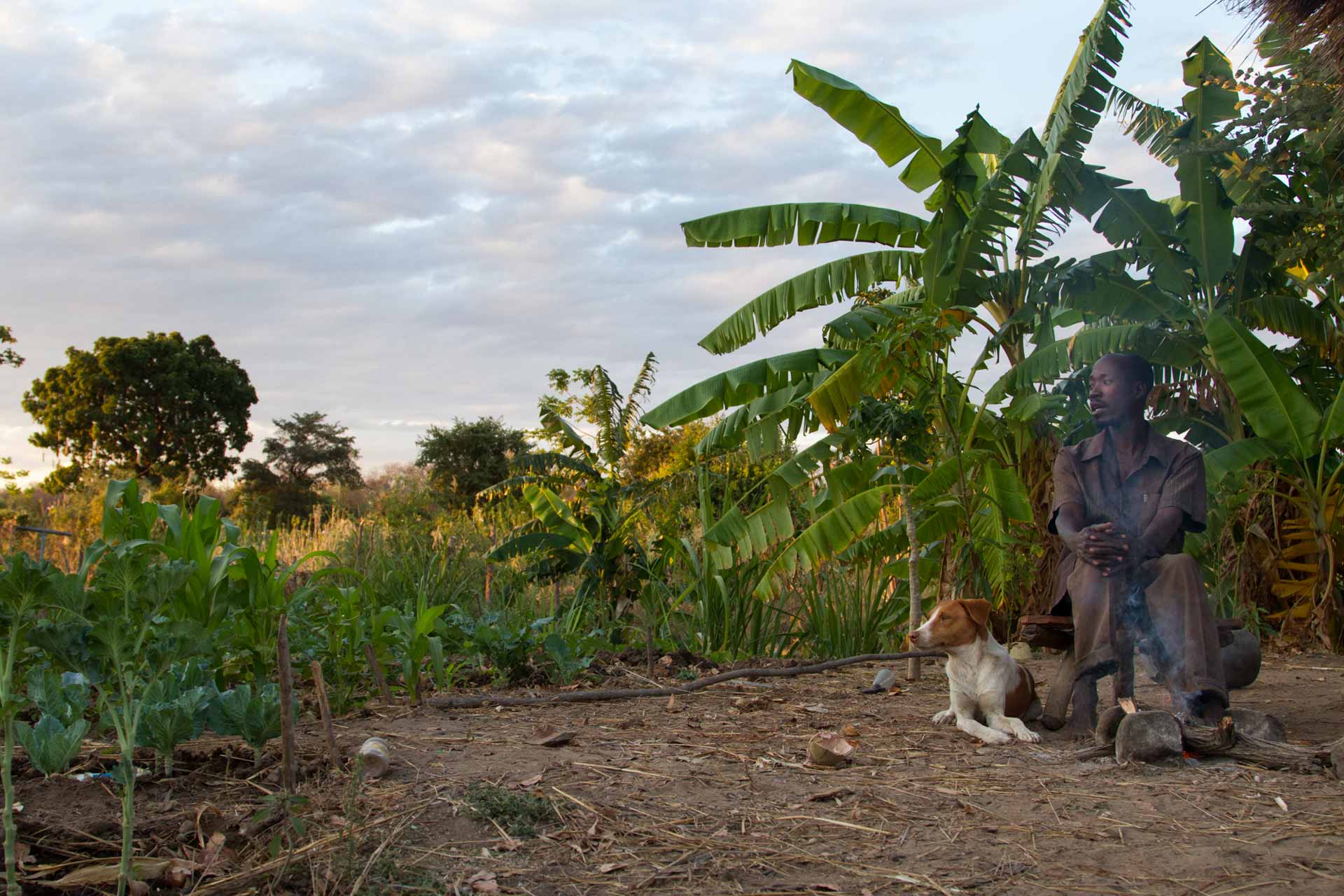 Solomon Mudende prepares for a night watching over his vegetable garden on the banks of the Mucheni River, in Chief Sinasengwe’s area, as evening falls. Ever since people were moved to the area, human wildlife interaction has been a problem. Though some of the animals were shot and moved to Chizarira National Park by the Rhodesian authorities at the time, today many of the animals are coming back. 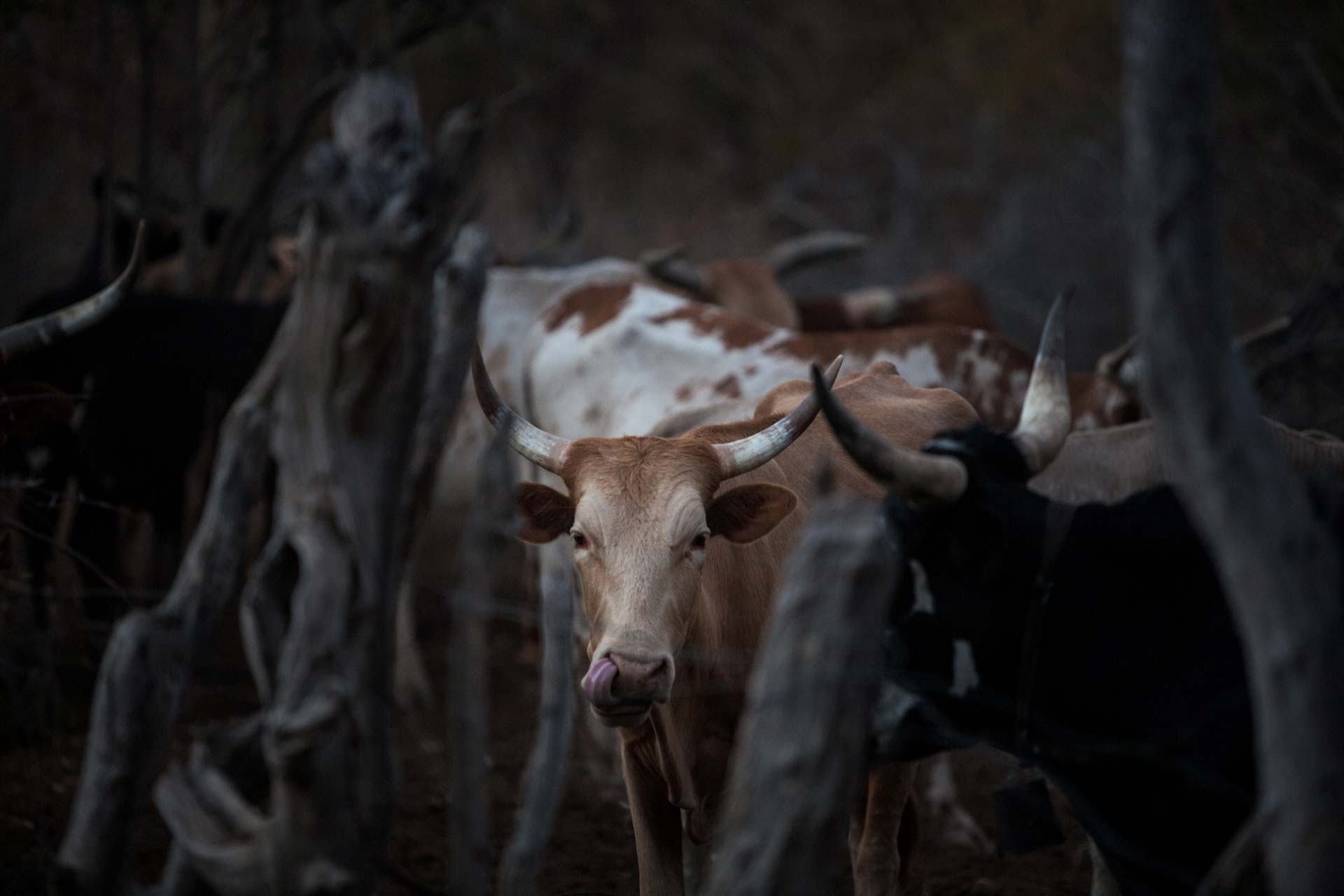 Judas Mudenda's cattle are put in the kraal for the night. In the 1990s the Communal Areas Management Programme for Indigenous Resources (CAMPFIRE) was created which aimed to bring significant financial earnings to rural communities that had large wildlife populations through conservation strategies. Twenty years later, CAMPFIRE is plagued by corruption and mismanagement and brings very little to the local communities who remain harassed by wildlife. 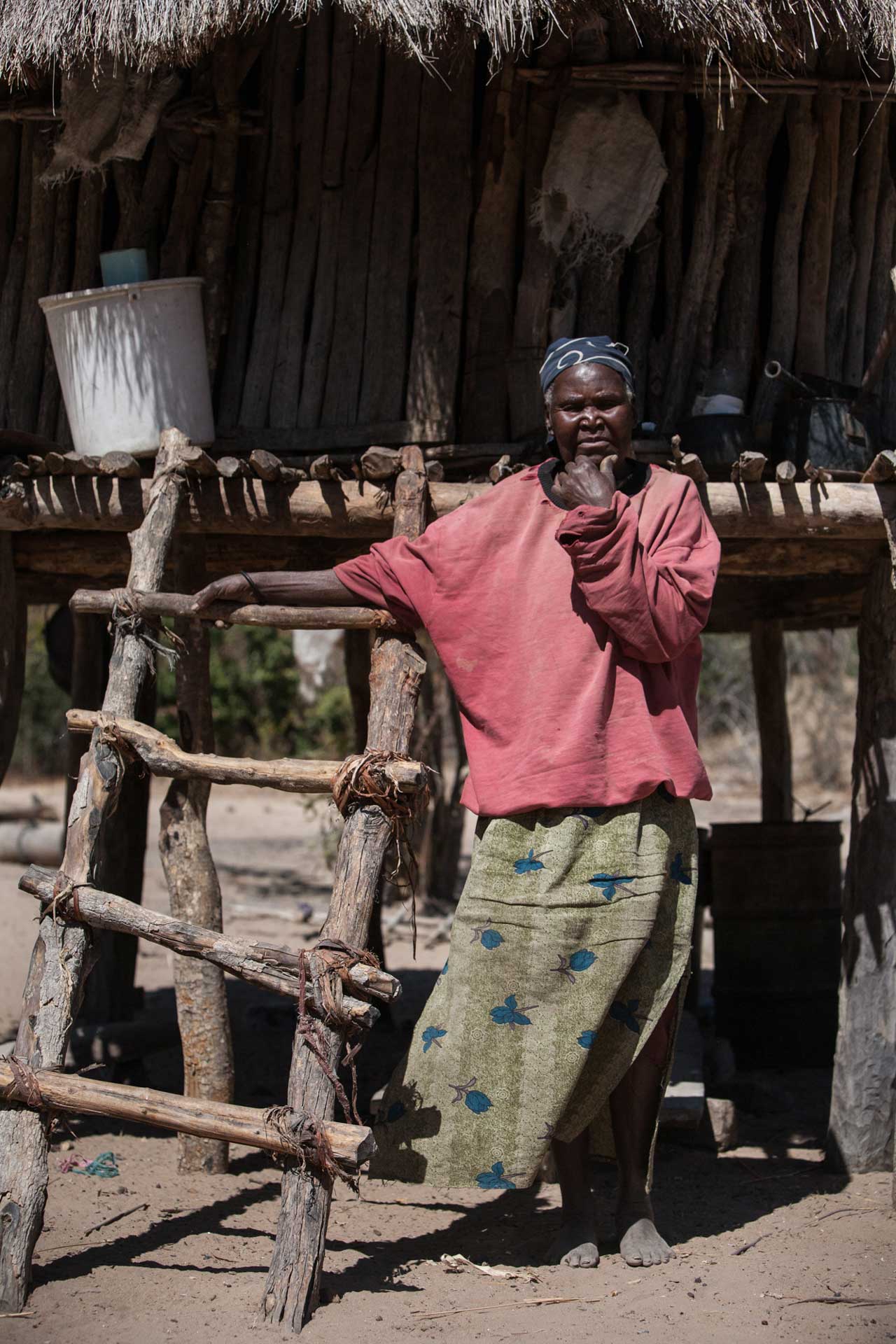 Ndubu Muzingili stands in front of a traditional Tonga hut, built 'upstairs' so that people could escape from wild animals. “They told us the water will follow you wherever you are going,” Ndubu said and although she was not sure of her age, she did know that in 1956 she already had 3 children when she was loaded onto a truck and driven away from her ancestral home in Sinamagonde. She laughed as she remembered how nervous they were climbing onto the lorry for the first time, "we were shaking, they had to push us." 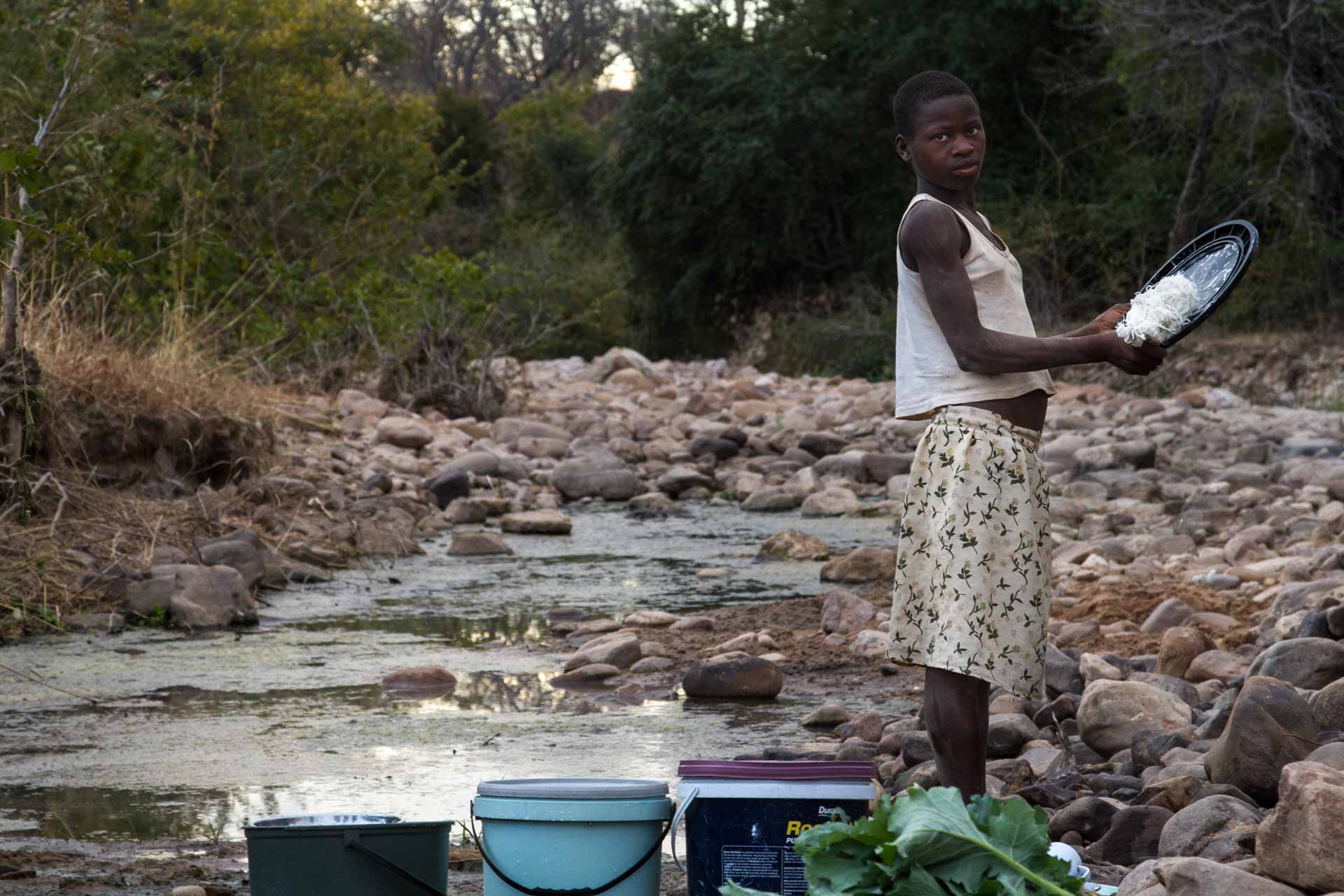 A young girl washes dishes and collects water at Mucheni River, filtering the water by digging shallow wells in the sand along the shore. All 12 resettled chiefdoms were placed in areas near rivers and springs and a few boreholes were drilled by the government of the time. Since then not much has changed. In winter when the rivers dry up, people dig in the riverbed, but some areas are better than others where the water table is very deep. 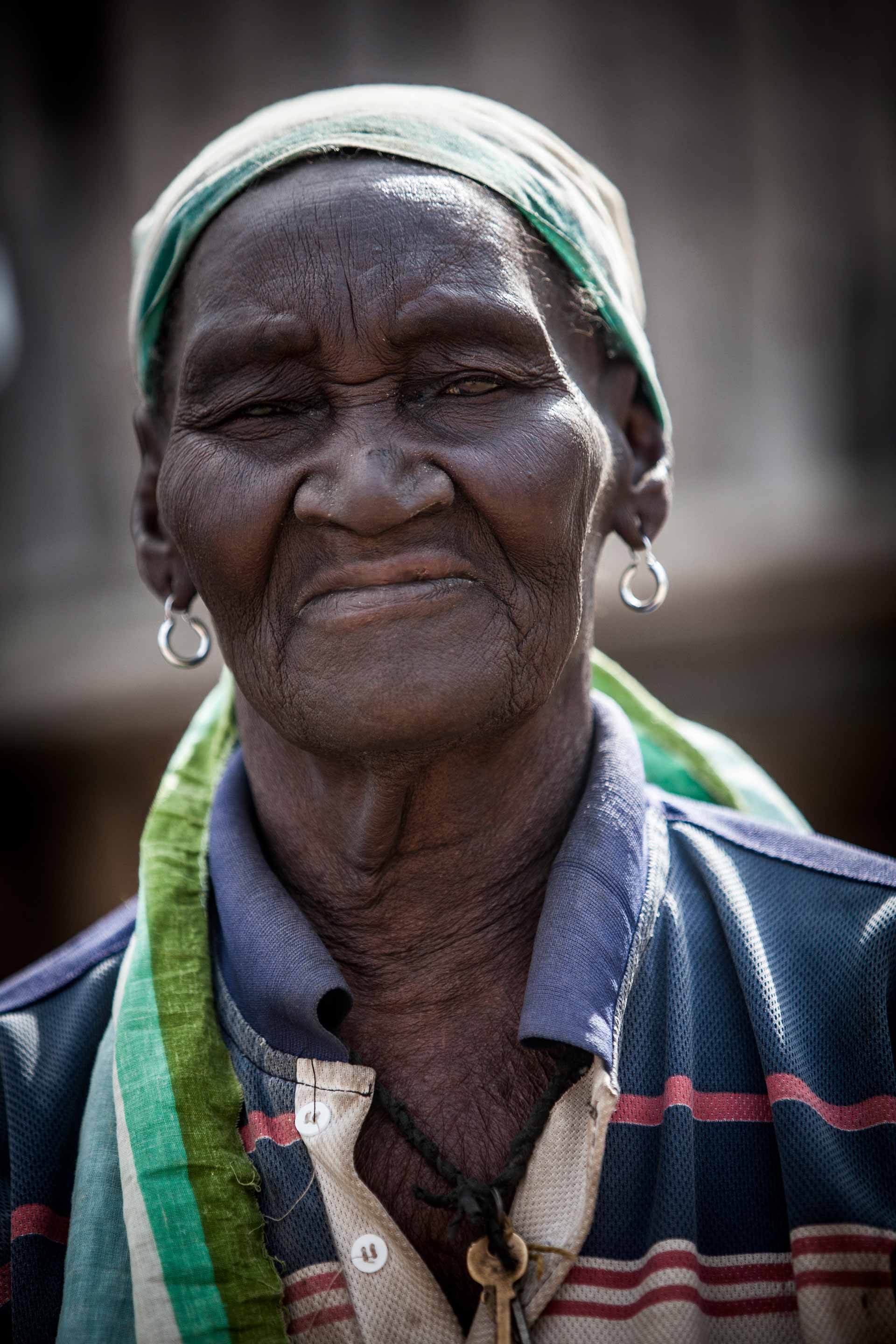 Rebecca Muleya remembers that when they were relocated, they were told about danger from crocodiles but they knew they would have to move because the water was already rising and coming close to their houses. She says she has never been back because it is too far away and stated pragmatically, "The river is no longer important because we were relocated, it's no longer the same, now it's just a big river…those who died when we relocated are outside, so our ancestors are all over." 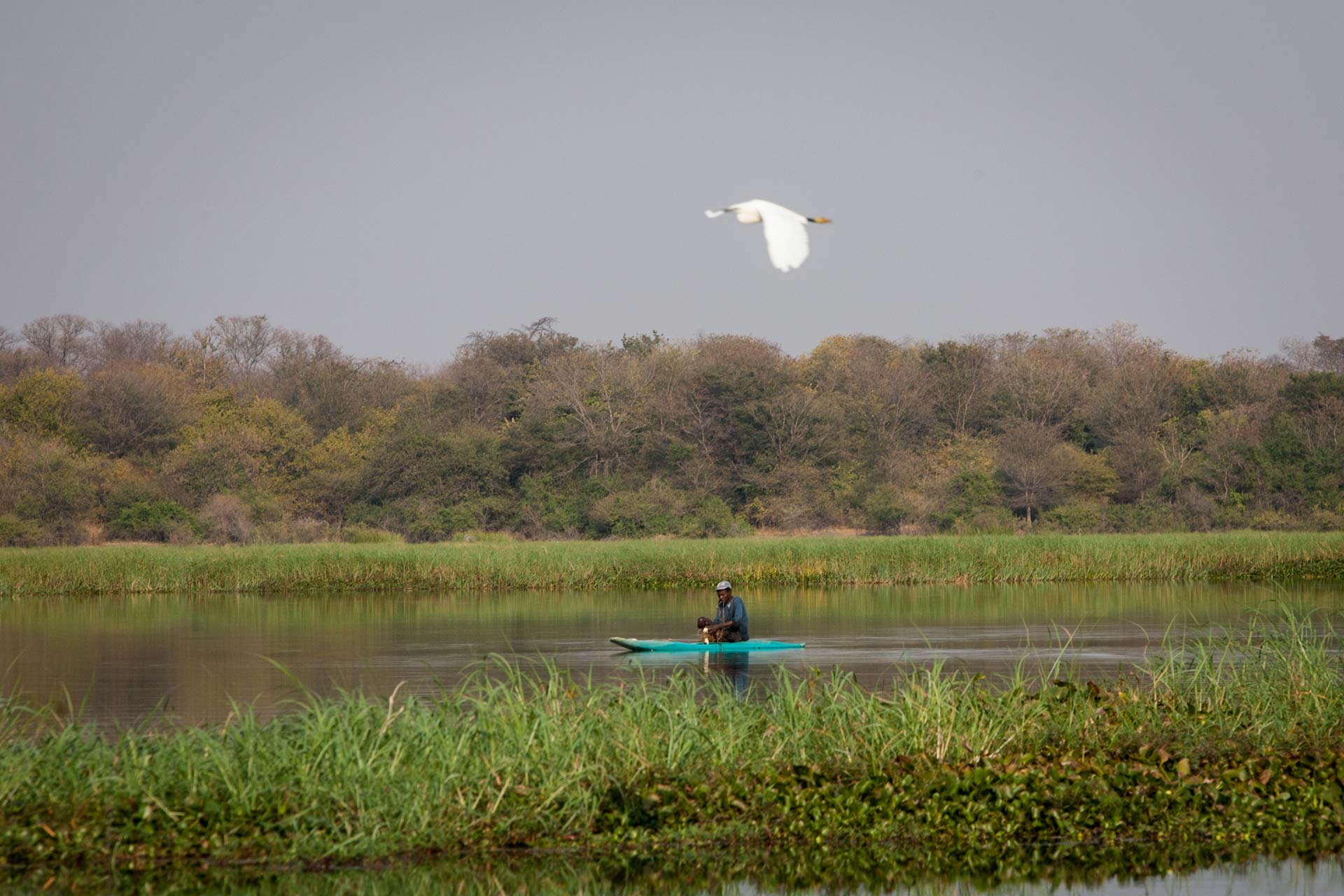 For those Tonga who were fortunate enough to be resettled closer to the water, things have also changed. Although they still have access to their traditional lifestyle, there are now laws governing their movement and activity. 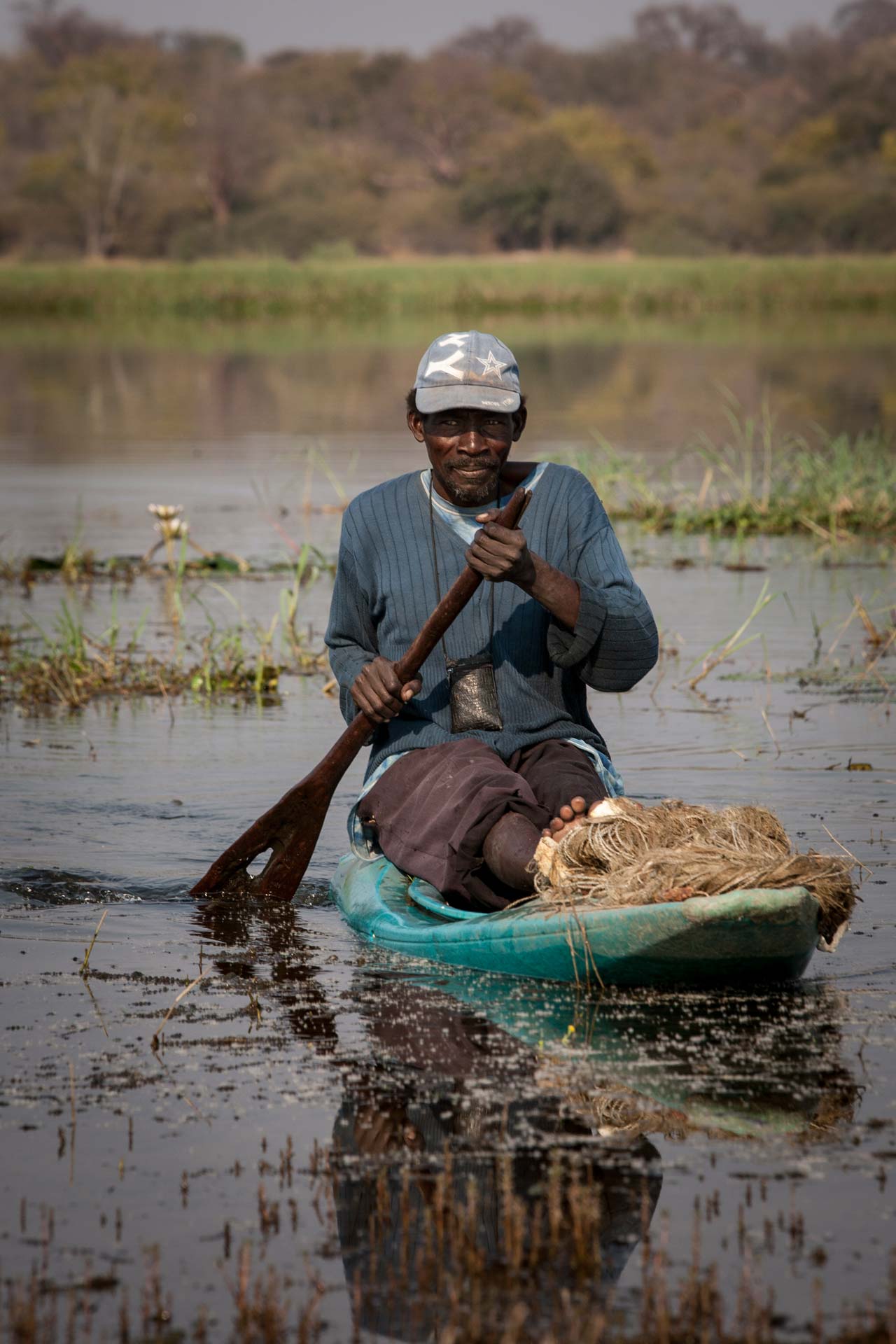 Edward, a Tonga fisherman, paddles across the Mlibizi River. National Parks occasionally patrols the area, confiscating fish and fining fisherman without permits but they are hugely understaffed, and sometimes the fisherman camp for a whole week in the area struggling to understand why the river they fished for centuries is now off limits. 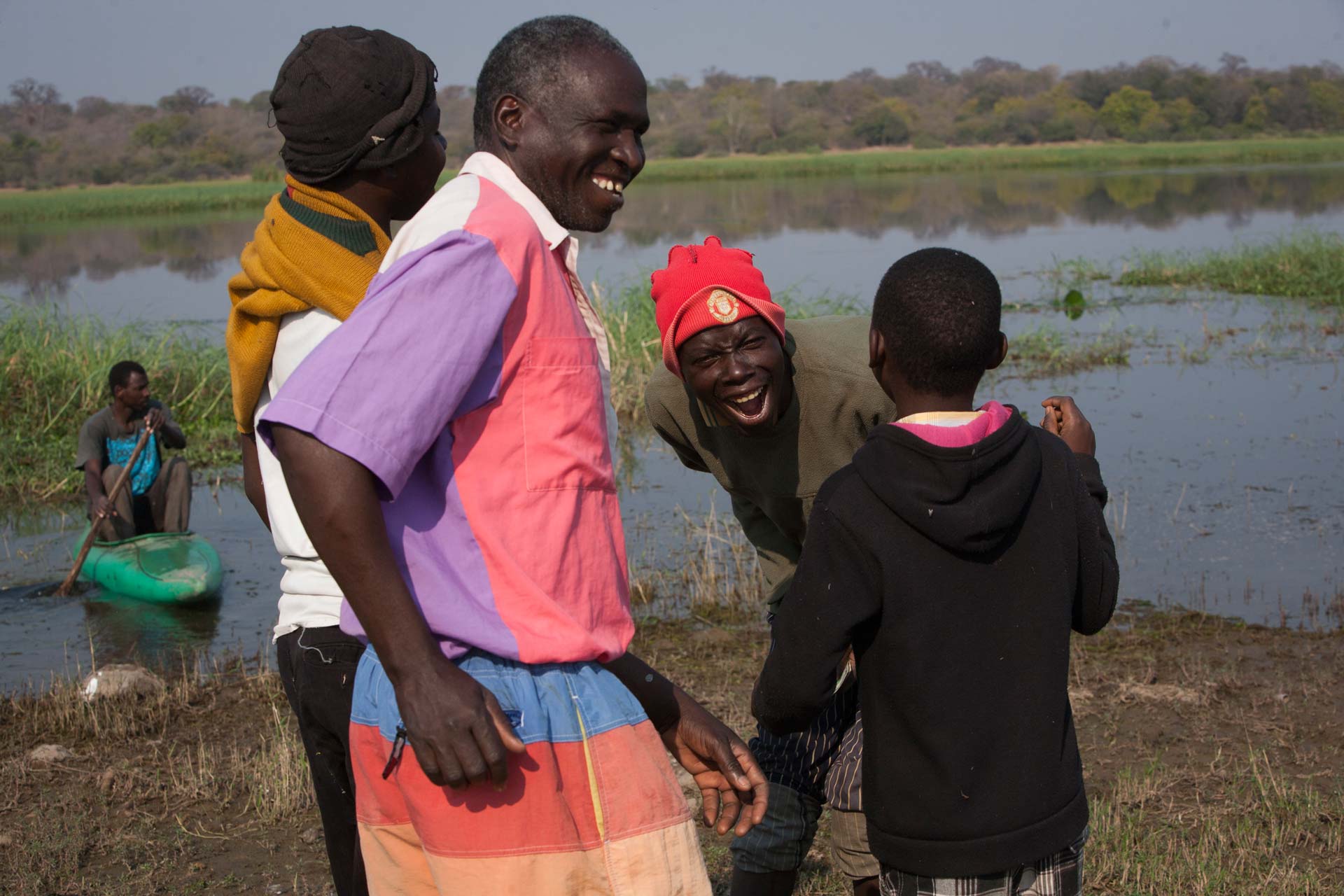 Julius Sianchali (front) laughs with two fisherman, Vincent and Maybe, as his son Challenge cracks a joke about the price of the fish. Many Tonga recognise the fishing industry as an advantage brought about by the construction of the dam but are upset about the fees they have to pay to National Parks to fish. Julius explained that in the old days, "we could catch as many fish as we could, and give it free to anyone, and there were plenty fish back then." Now he says, "the lake is under the control of National Parks, such that if I go to catch the fish, I've got to buy a permit. If I bring fish here (Vic Falls) I have to buy a permit for $20 every month." He bemoaned the loss of the free 'natural' things that the Tonga have lost access to. 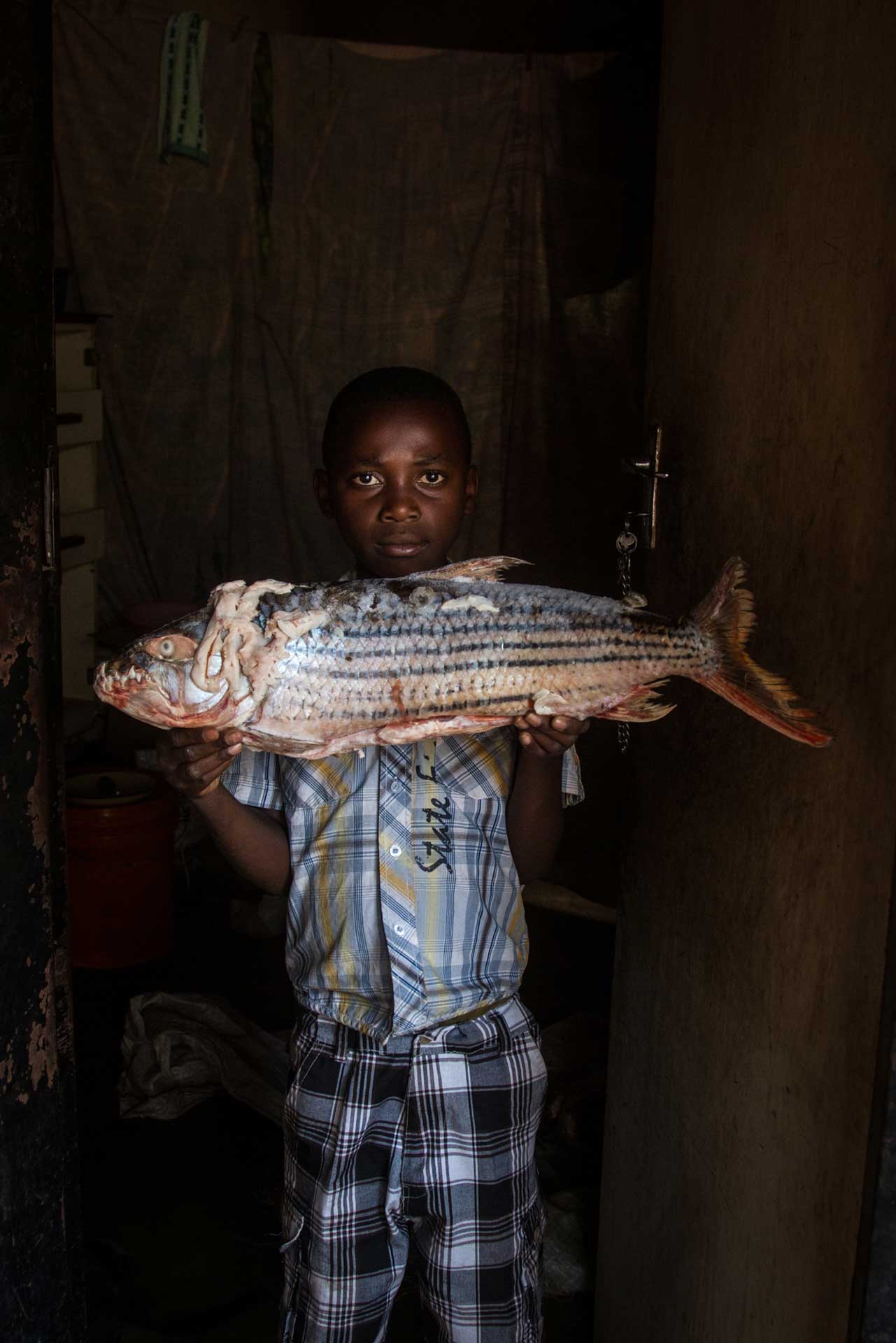 9-year-old Challenge Sianchali holds up a frozen tiger fish his father, Julius, has bought from the illegal fisherman. Julius collects and freezes about 80kg of fish before travelling to Victoria Falls to sell it in the market. 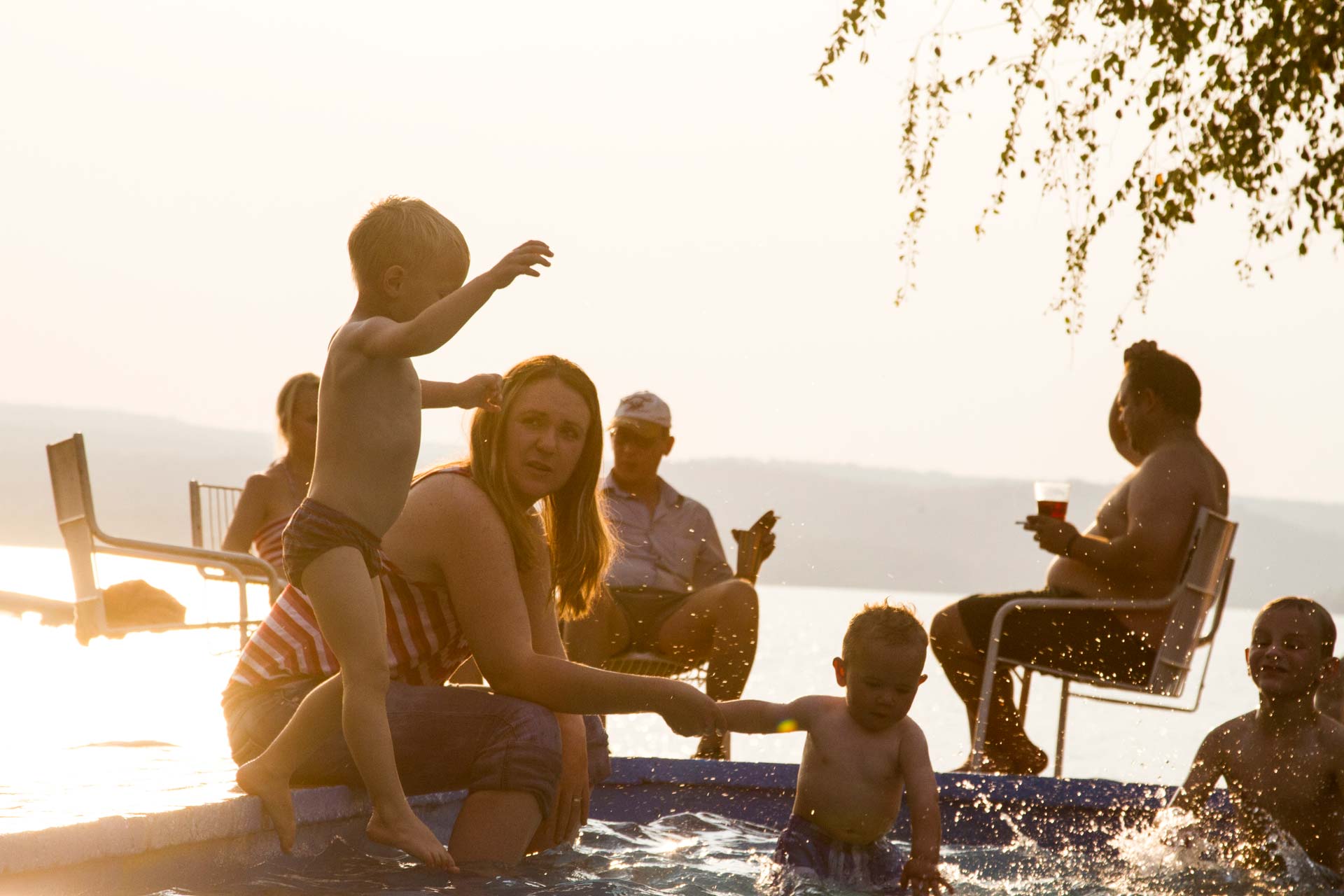 Remnants of an earlier time, the Blignaut and Maguire families enjoy a Sunday afternoon at the Mlibizi Hotel pool, on the Zambezi. It looks positive, but they were the only visitors at the hotel which effectively closed in 1999 . It has now re-opened but hotel proprietor Max Chigubu says Mlibizi continues to struggle with tourism. Though the hotel continues to employ local Tonga people from the surrounding area, no one had received a salary for 7 months. 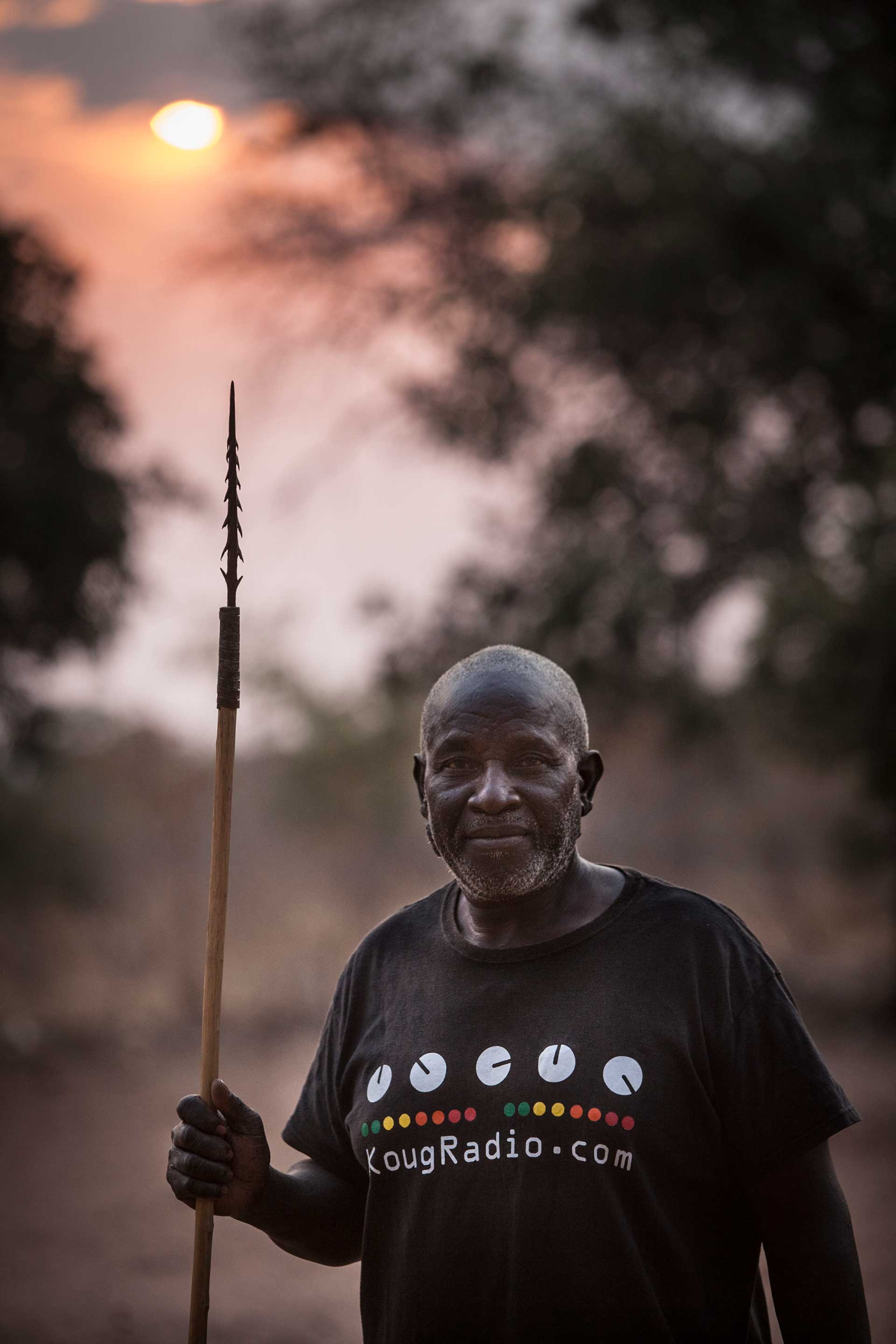 Thompson Mudimba was born in 1947 in Sichoba village and was proud to retell the story of Chief Saba, who refused to move his people all the way to Gokwe. Instead he built huts above the waterline where people could pay their taxes and the District Commissioner allowed them to stay in the area around what is now Mlibizi. Thompson worked at the Mlibizi Hotel for 20 years, but because of the economic collapse he received a total pension of only $36 when he retired in 2000. Asked if he would go back to Sichoba village if he could, Thompson was quick to answer, "One time!" 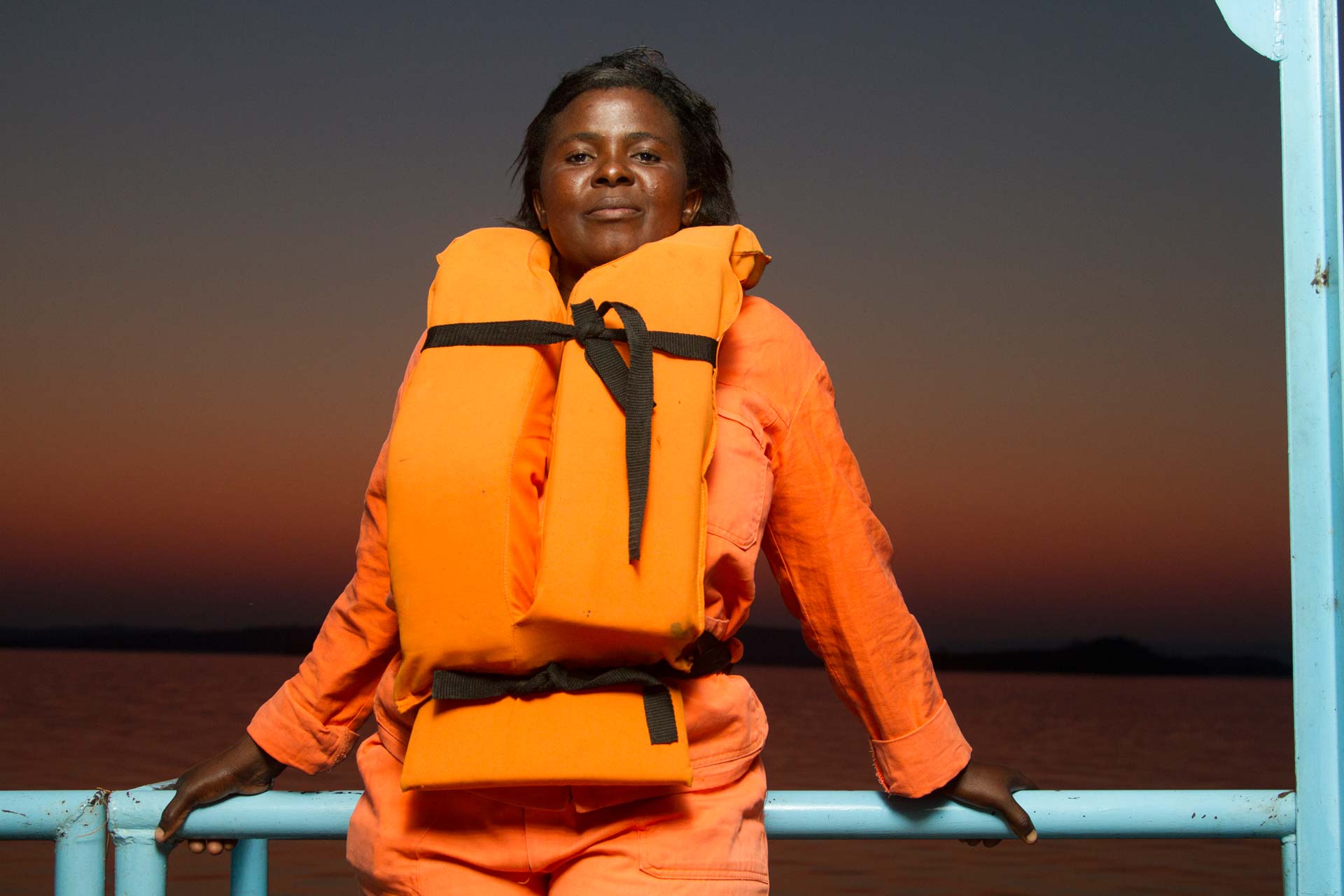 Tracey Munenge stands on board the kapenta fishing rig she runs with 9 other female members of the Bindawuko Banakazi Kapenta Fishing Society. Funded by a grant from UN Women through Zubo Trust, the project was started in 2011 to empower women who were selling fish at Siachilaba fish market. 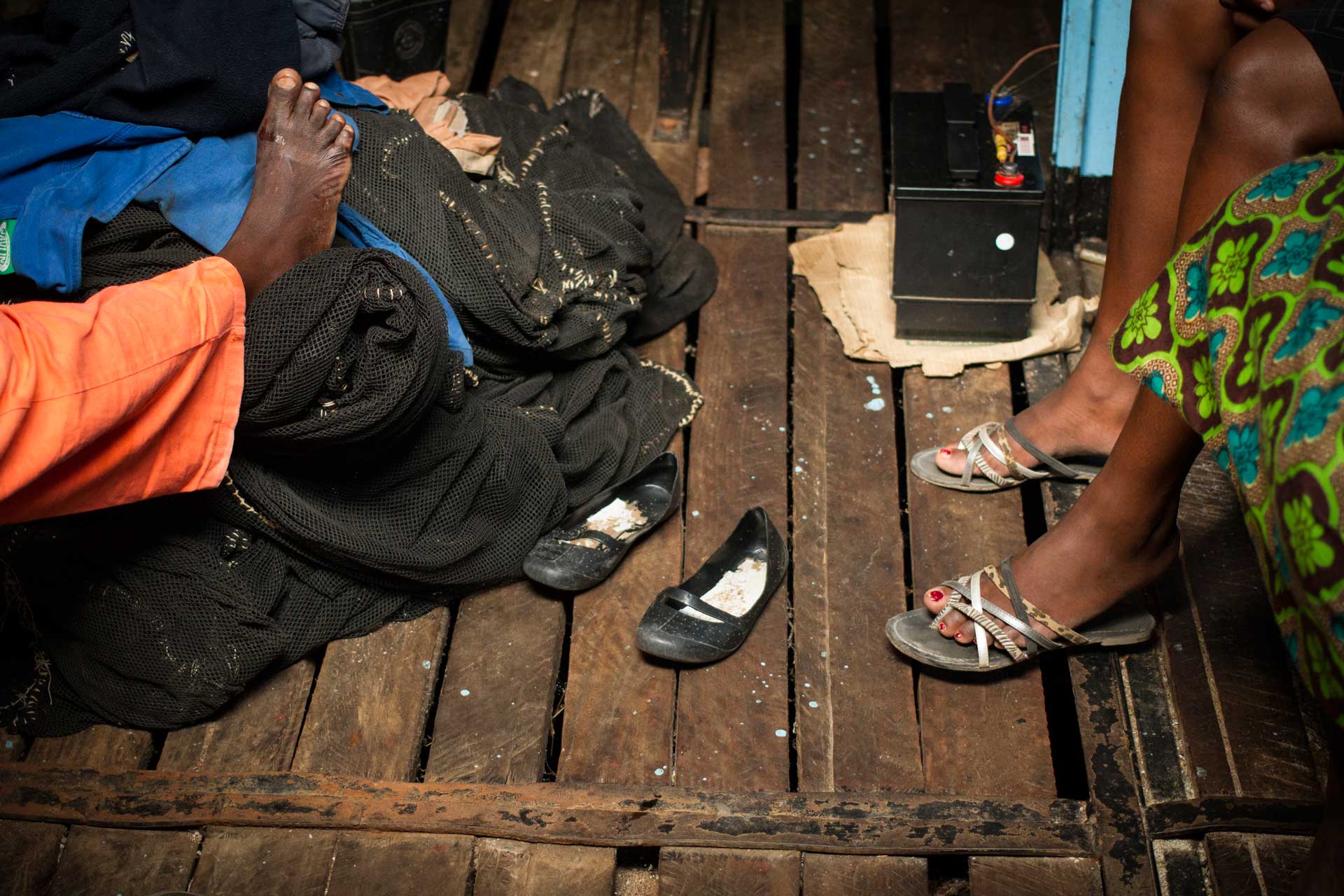 According to a report by UN Women, the fishing rig was designed with women in mind - including a toilet and a shower. Abigail Muleya, Monitoring and Evaluation officer for Zubo Trust, says that although they initially hoped the rig would be entirely owned and operated by the 10 women, they have realised that the skills required to drive the rig at night will take many years to learn. In the meantime, the collective employs two men, Patrick Munsaka and Drive Mugonde who pilot the boat. 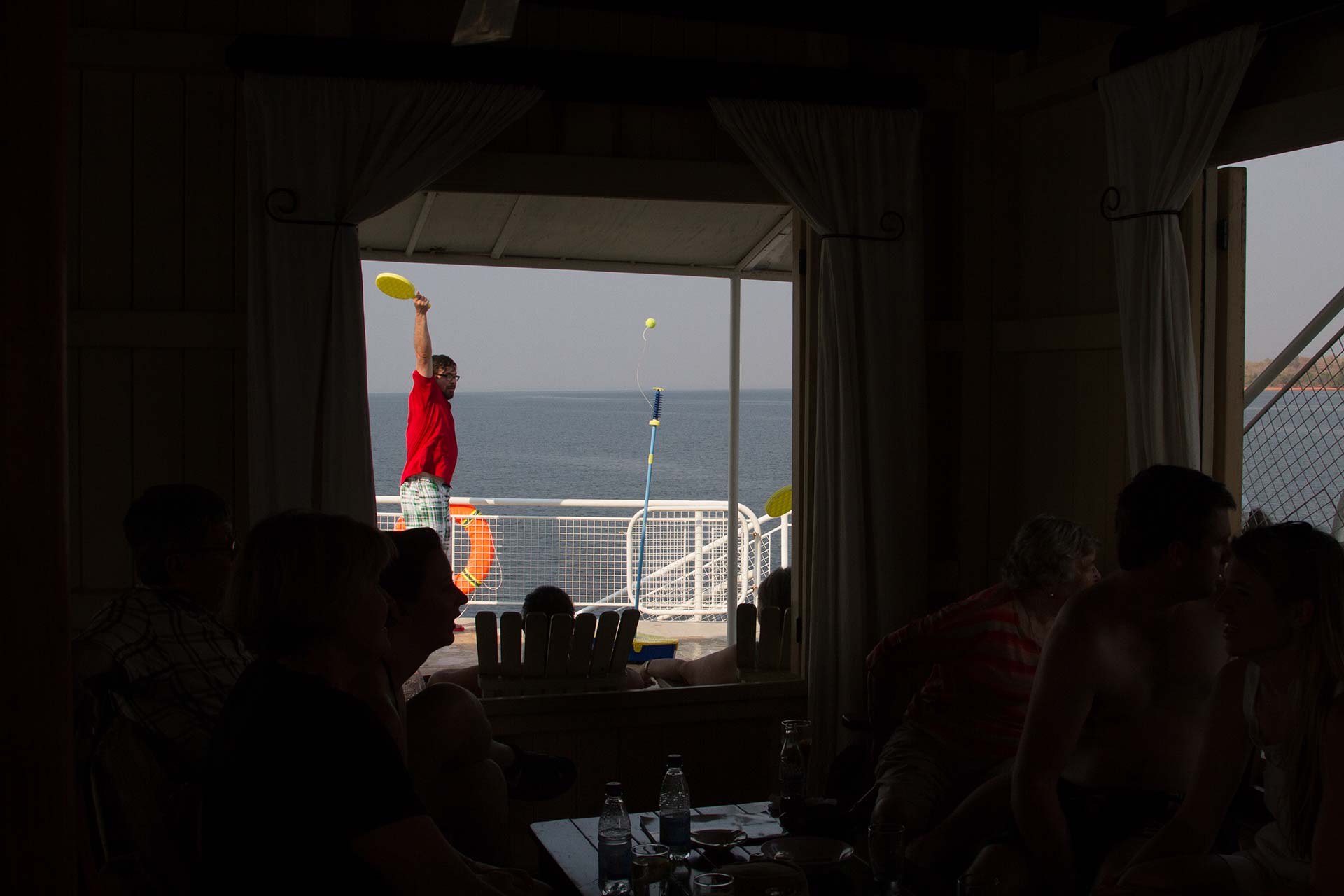 A tourist plays a game of paddle ball on the deck of the Zambezi Trader, a luxury liner that plies the length of Lake Kariba, The Trader employ largely Tonga crews from Kariba and surrounding areas, but they supply a handful of jobs in a district desperate for economic activity. 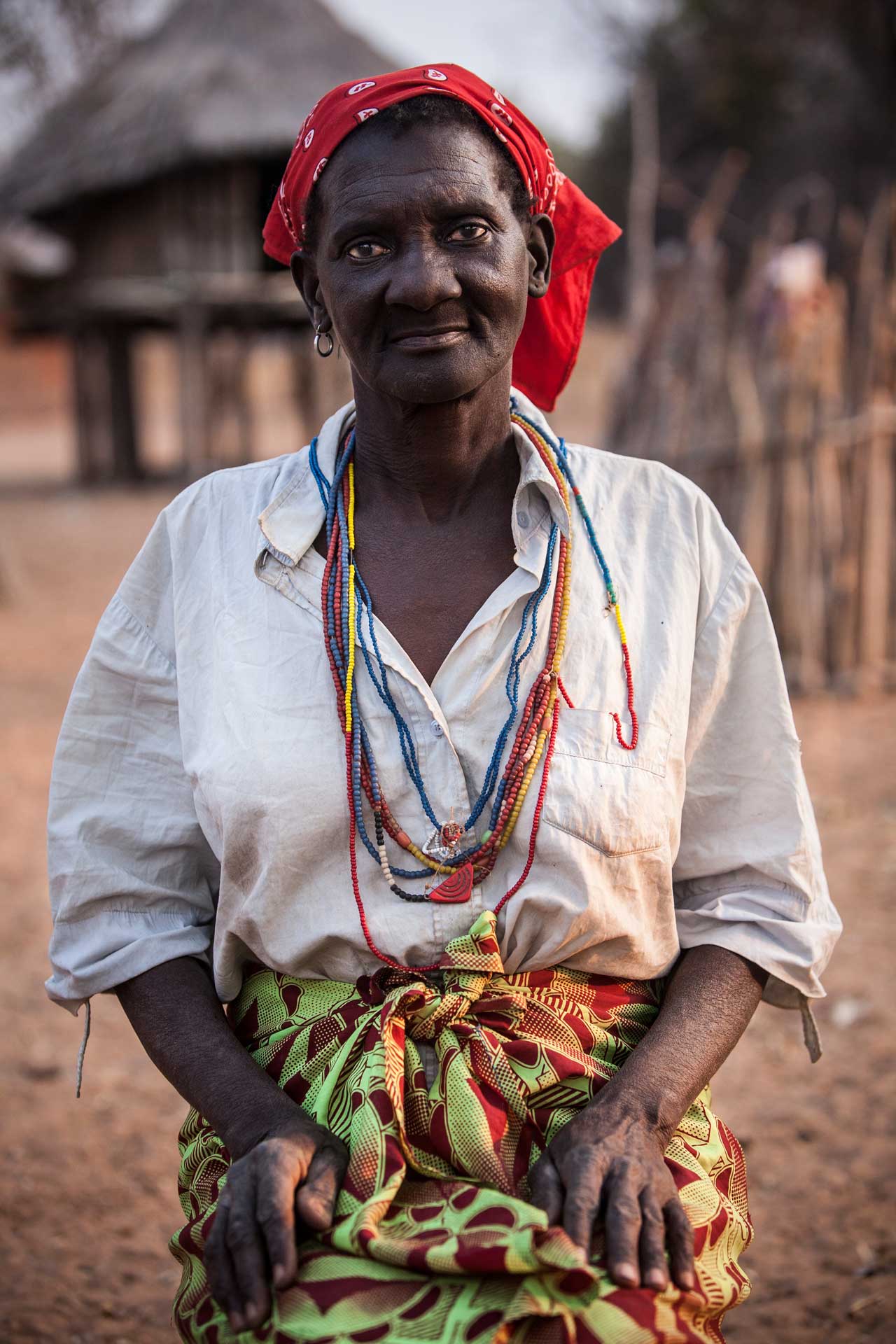 Belita Mudimba wears beads older than she is, which were brought 'kulwizi' (from the river) during the relocation. Belita remembers that after relocation women used to walk to Bulawayo to buy the beads, a distance of some 350 km, since they no longer had access to trade routes on the river. She suspected that women stopped buying beads in the 1960s because of the influence of Christianity, while other women claimed that most of the original beads were confiscated by soldiers who thought they had a spiritual connection that would affect the 1985 presidential election. 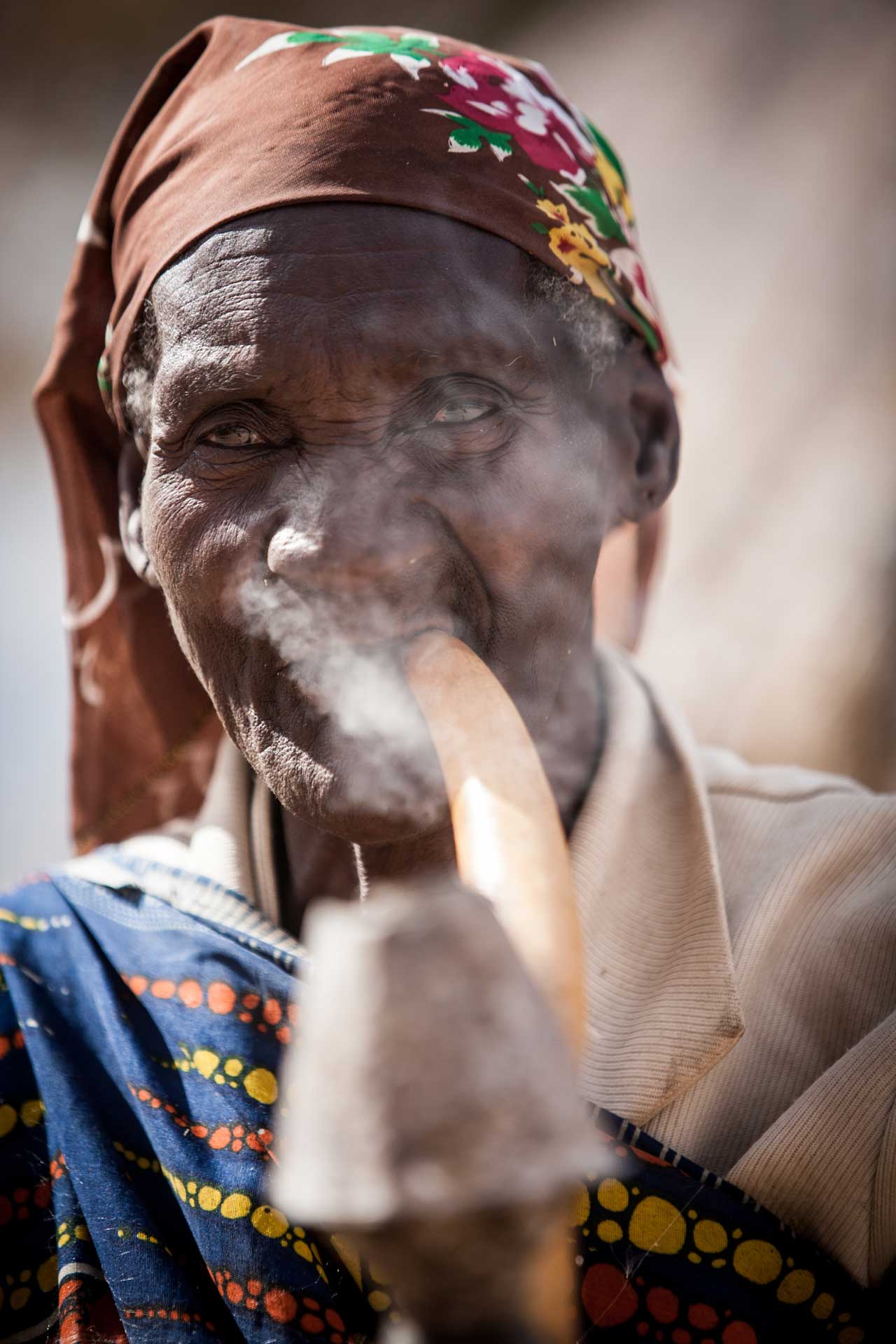 Kelesiah Muleya, a spirit medium, says "Being a spirit medium is painful, because it’s not clear, I don't know where I'm coming from and where I'm going." She has been unable to find a person with the right spirit to guide her as old traditions are dying and even her own children are now Christian. Her situation speaks for the Tonga as a whole, struggling to negotiate cultural change in a political, economic and climatic situation that is not of their own making.